Renaissance artists like Leonardo da Vinci probably guessed their work would inspire future creatives, but we wonder if they ever imagined things could be recreated with makeup. A Chinese vlogger who goes by the handle Yuya Mika has paid homage to Da Vinci in a way that’s making headlines.

Mika, whose real name is He Yuhong, is a talented makeup artist who decided to transform herself into the Mona Lisa. She recently posted the tutorial to her Instagram account, leaving commenters with their jaws open. Her skills are ridiculous!

With concealer, bronzer, foundation, eyeshadow, and a contouring pen, Mika made the job look amazingly easy. While foundation did the trick to get her skin the right tone and to blot out her eyebrows, it’s the shadowing that wowed.

The concealer and a contouring pen served as the perfect “painter’s brushes” to get all of Mona Lisa’s nuanced shadows just right. She then topped everything off with a wig. Just look!

The cool time-lapse video makes it look as if this only took a few seconds, but we know it was a bit longer. But do you know how long it took da Vinci to finish his Mona Lisa?

Experts pin it at four years! Granted, all Mika duplicated was the face, but her version is crazy close. Mika is a newbie on the Western social media scene but her tutorials are so spot-on that she’s already attracting thousands of fans to her Instagram and YouTube accounts.

In China, she’s been posting to popular sites like Weibo, Dou Yin, and Miaopai where her artistry has been viewed millions of times. There you’ll find she’s also done versions of Taylor Swift, Selena Gomez, and Tilda Swinton.

Judging by some of her other posts, she’s a lover of da Vinci’s work, as she also recreated another one of his works: Lady with an Ermine. If that and Mona Lisa aren’t impressive enough for you, check out her take on Marilyn Monroe. We. Can’t. Believe. It. 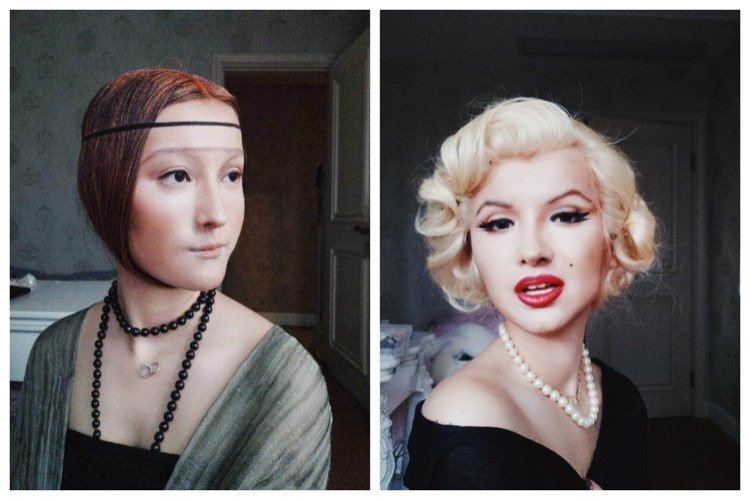 Those of you who work with makeup on a regular basis can probably relate to contour and highlighting struggles. Endless clicks on how-to videos may help you meet amateur goals, but how many times do you have to start your cheekbones over and over? This beauty vlogger gets five gold stars just for her contouring abilities.

Watch the video below to see Yuya go from an everyday woman to Mona Lisa. And don’t forget to peep how she nails the facial expression – eyes and all! Aspiring makeup artists may find themselves inspired by her technique and level of mastery.

Hopefully, this young lady has some future opportunities on movie sets as a makeup artist. In the meantime, we can all continue to be dazzled by her work through social media. If you want to follow her crazy cool tutorials, check out Yuya Mika’s transformations on YouTube or Instagram.

Are you impressed by this artist’s talents? Have you ever attempted something like this? Which of these recreations is your favorite?