Mom’s ‘Bucket’ Solution is the Cleaning Hack We All Need

If you’re a mom, you know the struggle of having your kid’s toys strewn all over your house. From tripping over Barbie dolls and fire trucks to stepping on Leggos with your bare feet (let’s not even talk about that one), it’s like your home is one big messy Toys ‘R Us commercial, amirite?

Point is, toys have taken over your life. And it can honestly be really overwhelming, especially when there’s nowhere to put them and they’re just constantly sprawled out all over your home.

One mom named Jessica McGinty struggled hard with this fact. She was so fed up stepping on all the toys in her home that one day it just hit her.

Her super simple hack is, well, super simple, but it’s still resonating with moms everywhere. It’s because of what she’s calling her idea. When she posted it one day to her Facebook, the response was insane—and for good reason. 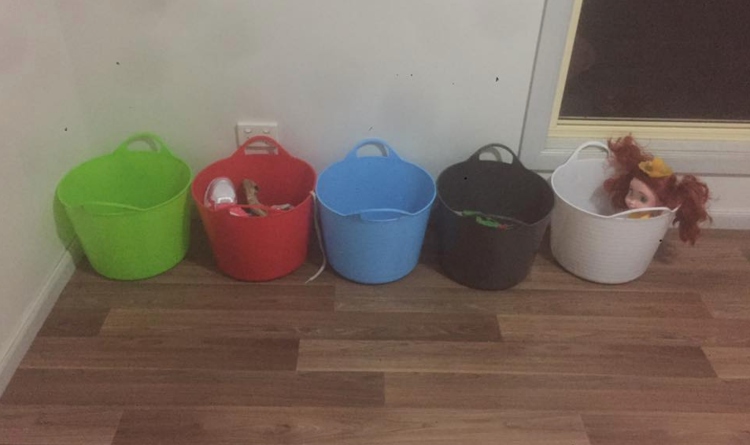 “Today I got the kids fucket buckets™,” she wrote along a photo of five different buckets filled with toys. “If they leave it laying around, it goes in their bucket. If it’s still there at bedtime it goes in the bin because fucket if I’m cleaning it up.”

Ha! We love this. And so does everyone else. With nearly 45,000 reactions on Facebook, this mom has her own fan base begging her to actually come out with a line of “fucket buckets.”

“Holy smokes, that’s brilliant!” someone posted, with another commenter offering another smart idea: “We should def do this. Maybe put a few of the kids in there too.” Wisdom all around!

So how has the bucket hack been working out for McGinty? Great! “We’re a blended family of five, nine and under—nine, seven, seven, six, and two. It’s working well so far,” she explains. “I can wander around and pick up any missed things and drop them in the buckets and the kids love them, knowing exactly where things they’ve missed are.”

When she originally posted the idea, she was just trying to be funny and didn’t think anything would come of it, but McGinty says she’s gotten so much unexpected positive feedback.

“The response has been crazy to be honest! I had no idea it would resonate so much,” she says. “I might have to release a sticker line or buckets or something.”

We’d have to agree, and would totally buy it if she did!

What do you think of this mom’s idea to finally finding a place for toys? Do you have any hacks you use for when you feel like your house has become the next FAO Schwarz?