When you’re a mom—especially a mom to multiples—multitasking is a necessity to life. It’s something that you have to learn to do and take on, whether it means cooking dinner while simultaneously doing the laundry or pumpkin breast milk during an Ironman race. The latter is something Jaime Sloan knows a lot about.

The 34-year-old mom of two recently ran in an Ironman race and had to do some pretty crazy multitasking in the process. She had just given birth to her second child seven months prior to running in the race, and was planning to take a quick break so that she could pump breast milk.

Problem in this plan however: She realized during the cycling portion of that race that she was actually on her way to breaking a personal record if she didn’t stop. She couldn’t not pump though—so what’s a mom to do in a situation like this? What Jamie decided to do was truly incredible!

“By the time I got off the bike, I knew I needed to pump,” Jamie said. “But I was also looking at a personal record because I had had a really awesome bike ride. I just thought, ‘I’m going to do it on my run.’”

Pumping during the run was a bit of a risk however, as there’s a “no nudity” policy, and Jamie wasn’t sure if this was a basis for disqualification. 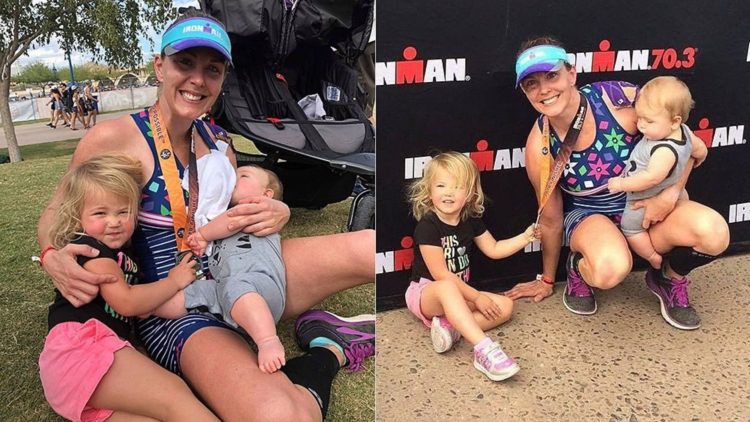 But alas, she threw a cloth on top of her to cover up and pumped away. And the good news is that the people who realized what she was doing were super supportive!

“For the most part I don’t know if people even noticed, I did get some looks from women but they were just big smiles,” she said. “There were actually two men who ran up to me and asked if I was OK. I think it was because I had a cloth over myself, and at first it might have looked like I was bleeding. But once they looked down and saw my pump they were like ‘Oh, OK!’”

As she thought she might, Jamie wound up setting a new personal best, completing the race in 6 hours, 12 minutes and 44 seconds.

For someone who struggled with sciatica during pregnancy that made her barely even able to walk, and who had to wait a month and a half after giving birth to start running again, Jamie felt amazing.

“I hope that it can encourage other women and mothers and really anyone who has a lot going on in their lives,” she said. “There’s always a way that you can make it happen, you might have to get a little creative from time to time. No matter what, if someone believes they can do something, they can make it happen because it is possible.”

They say you can’t do it all, but Jamie is living proof that you kind of can! What do you think of Jamie’s ability to multitask and pump during a race?