Usually, once someone’s made up their mind about a makeover, there’s no going back. For people who have had long hair for what seems like forever, it can still be a big decision. How short do you want to go?

Elise reached a point where she was over her long, curly hair and wanted to switch things up. So, she decided to see The Makeover Guy for – you guessed it – a makeover. Christopher Hopkins, the man behind this bewitching video, has built a reputation as a master of makeovers for women over 40.

When Elise showed up for her turn in Christopher’s chair, she had a little chat beforehand with his staff. She let them know she was game for anything when it came to her waist-length tresses. Her exact words? “Do whatever.” But that’s not what they told the boss. Wink wink. 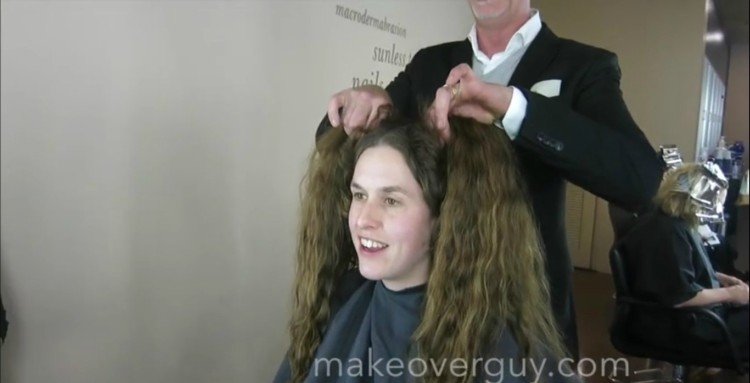 TheMakeoverGuy
As Christopher trotted out to meet Elise, he gleefully played around in her hair while she talked about how she wanted something different. And she tricked him into thinking she wanted a big change. That is, she only wanted 1 or 2 inches taken off. That caught Christopher’s attention!

After he figured out she and his team were only joking, Christopher grabbed his shears and got to snipping. About a foot of hair was chopped with that first swipe, and it looked like there was more to come. Nobody cried or cringed. Score! Even Elise announced,

In her confessional, she said that she didn’t know what to do with all that hair anymore. She also admitted that the one person who found the ultimate joy in playing around in it was her 9-month-old baby. Since she was not at all sad to see it go, Elise’s makeover was a success!

Check out the clip to see Elise’s full transformation, which included a fab haircut, makeup, and brows. It’s amazing how much younger she looks, and her glowing smile lets us know this was a win. She’s in love with the look and her final words under the dazzling lights and cameras: thank you. Sweet!

This mom got styled in a way that’s sure to turn heads, and she got to keep some length too. Elise made it clear that she’s hardly made the time to squeeze in a beauty routine with her busy lifestyle but she trusted Christopher to get it right for her. Good on her for getting some pampering. Her baby is going to have to find something else to pull on now.

Christopher and his team did an amazing job with helping Elise make the big chop and brightening up her face. Did you notice the twinkle in her eyes? For the first time, she actually had a salon visit that ended up with a happy result. That’s says a lot about the work that they do.

What are your thoughts on this mom’s beauty makeover? Would you be brave enough to cut off that much hair too? How short would you be willing to go? Tell us in the comments!