Parents who are used to reaching into their disciplinary bag of tricks will pull out everything from time-outs to privilege snatching to public shaming. None are fun for the child, and truth be told, they aren’t for mom or dad either.

Besides harsh punishments, few tactics quite draw the ire, emotional shock, or judgmental commentary from people as that of canceling a holiday. Especially when that holiday is Christmas. To young kids who are accustomed to receiving loads of gifts, this is world-crushing.

But one mom – with the help of her right-hand Elf on the Shelf – did just that. Christmas is officially canceled unless conditions are met. Now, we’re sure she doesn’t mean the religious aspect of the holiday, but the presents, decorations, and festivities are out of the question.

The mom of three from Queensland in Australia was not happy with her children’s behavior, and issued a stern warning through her proxy elf, Elsie. In addition to writing this note, she wrapped the entire Christmas tree in plastic wrap.

“Christmas is cancelled for now! If you want me to keep visiting, a Santa visit and your free presents back your behavior needs to improve.

Santa is very angry and I’m disappointed. Be good and say sorry to mum. You all have 1 week to improve. I’m watching.” 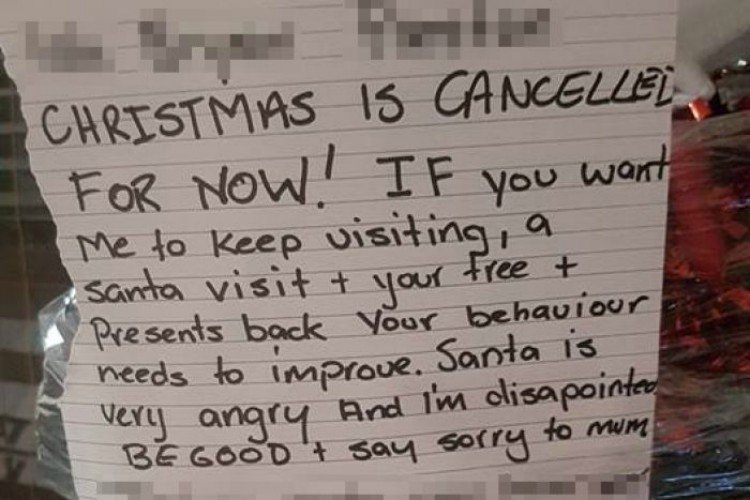 After ABC News Brisbane posted a pic of the note and tree on Facebook, the public weighed in. There were those who disagreed and felt that it was cruel to dole out this type of punishment for Christmas. Some thought she was making hollow threats and being a lazy parent.

Still, many supported her and thought it was a great idea. Some commenters praised her actions and parenting style, pointing out that it was a good way to remind the children who’s in charge, and that they should be grateful. Others thought it was fun parenting.

We doubt this mom is sitting around throwing her head back in diabolical laughter, relishing her move (and Elsie’s execution). Though it wouldn’t be the first time a parent has “canceled” Christmas. Stories abound of parents removing decorations, packing up the tree, and having their children donate all their gifts to charity. Lessons are learned about entitlement, behavior, gratitude, and fellowship. 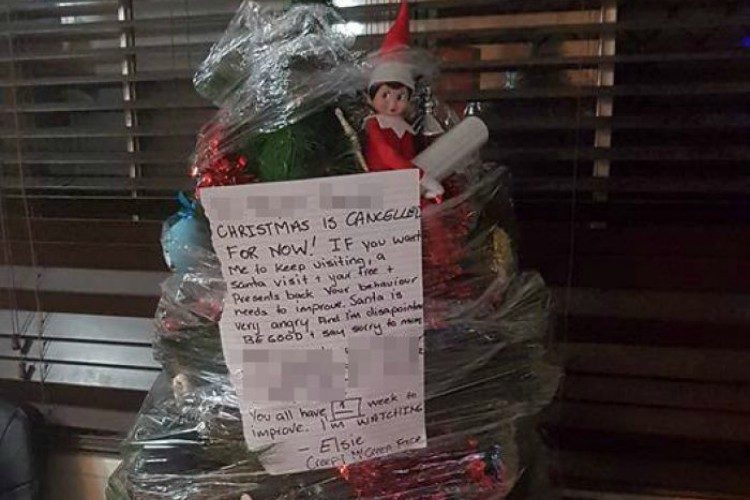 According to the experts who spoke to ABC, this mom might actually be doing more harm than good. There was a chance it could backfire, or lead to a scenario where one or two kids shaped up but not all of them. What then? One mentioned that it could breed long-term resentment from the child towards the parent.

While the world remains divided about whether it is okay to use Santa as a blackmailing tool, it is unclear whether this family restored Christmas or not. Since this happened earlier this month, it’s possible that these children got their acts together and learned some valuable lessons. But it’s also possible they’re getting nothing but a lump of coal, courtesy of Elsie and Santa.

What’s your take on this mom’s decision? Have you ever canceled Christmas in your household?