Why the Internet is Embracing These 11-Year-Olds’ Unique Features

It’s hard to deny the fact that the fashion industry has a stronghold on the fabric of our society—for better or for worse. Everywhere you look there seems to be the same old model, in the same seductive pose, selling the same pair of jeans…If you are sensing a hint of boredom in our voice, then you would be right!

That’s why we were so excited to learn about a set of sisters who are literally redefining the rules of the modeling industry as we know it. Eleven-year-old Sao Paulo twins Mara and Lara Bawar, along with their older sister Sheila, are setting the Internet ablaze with their absolutely awe-inspiring photos.

Both Mara and Lara were born with albinism, a condition that is so rare, it only affects about 1 in 20,000 births. Albinism is characterized by a lack of skin pigmentation, giving those who have it very pale skin, hair, and sometimes eyes.

It was their striking appearances that first brought them into contact with photographer Vinicius Terranova. In a photo series entitled “Rare Flowers,” Terranova put the girls’ one-of-a-kind beauty at the forefront of his images. He even decided to invite along their breathtaking older sister to pose in many of the shots. 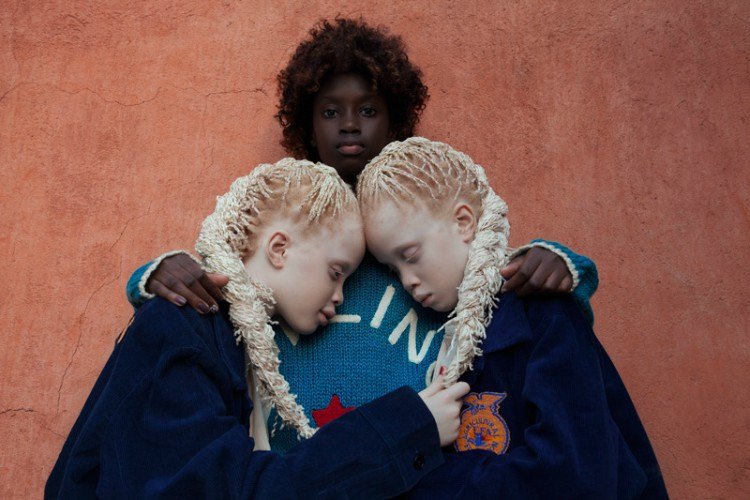 Vincius Terranova
Though the dynamic duo was born with albinism, Sheila was not. This gives the shots featuring all three of them a sort of depth that we think is so endearing. At first glance, you might not see the resemblance, but when you look closer, it’s easy to feel their tenderness for one other. The three are all family indeed!

Sheila just loves the warm receptions that both she and her sisters have received from all over the world. In an interview with Metro, she says, “It feels wonderful to put this out there, to communicate with people who identify with our work. We like to see our beauty being valued by its unique aspects.”

The twins also discuss just how happy they are to show off their exceptional features with the world. Lara says, “We feel albinism is pretty, we love our hair, eye color, and skin tone. We also love to read the beautiful comments on our pictures.”

The comments that Lara is referring to are from their 50,000-plus adoring Instagram followers. You see, since Terranova’s photos of the three sisters were first released last year, the girls have gained a legion of admiring fans on social media that grows by the day.

The now iconic set of shots even caught the attention of powerhouse fashion brands like Nike, Insanis, and even Bazaar Kids. Not too shabby considering these gorgeous girls were just your average kids about a year ago.

To check out even more spectacular shots of Lara, Mara, and Sheila Bawar, be sure to click on the video below. We’ve gotta say, it really is refreshing to see the fashion industry embracing some truly diverse faces. You go girls!

What do you think of the sisters’ modeling shots? Do you think that they will have long careers in the fashion industry? Do you have any personal knowledge of albinism? Tell us all about your thoughts and experiences in the comments section below!