These Parents Were Shocked By Their Rare Twins

Usually, one of the struggles of having identical twin babies is being able to tell them apart. Especially when they’re very young, twins are often difficult to identify, and parents of multiples often have to buy different colored outfits to be able to tell which baby is which. Well, parents Andrew and Tracey-Ann Balasco don’t really have that problem with their beautiful newborn babies – their situation is entirely unique. Although they are identical genetically and in many of their features, there is one big difference between these two siblings: their skin color.

Although it’s not unheard of, having twins with different skin tones is very rare, essential with one in a million odds. This Bristol-area family was completely taken off-guard when the twins, Orlando and Natalia, were born via Cesarean section. At first, it seemed that both of the babies were white, with baby Orlando looking only a tad darker than his sister. But over time, the rarity of the situation became more apparent.

“And then when they did arrive, and they sort of showed them over this curtained area…and we were like, ‘Okay, that one has come out as white,'” Andrew said in an interview with BBC. “Then Orlando came out and he was only sort of a little bit darker, but not too much darker [than Natalia]. But he gradually got darker over time.”

Considering the genealogy of the twins, doctors say it’s not that implausible that the twins were born differently. Children’s genes are pulled randomly from their two parents; although some genes are dominant, this doesn’t guarantee that they will appear in children. This is even less certain in a case of multiple births. 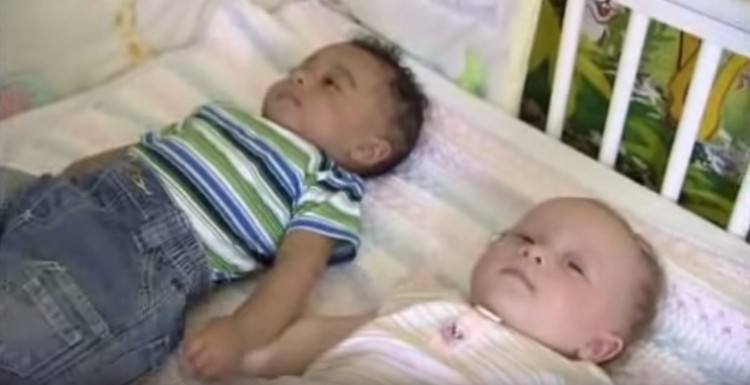 RiotUpdate
Both parent confirmed that not only do they have differing races, but the genealogy of their ancestors is varied. Andrew said there are a medley of races of both his side of the family and Tracey-Ann’s side of the family, so the twins genes probably pulled not just from them, but from generations before them, too.

Naturally, the twins get greeted with some confusion on the street. When asked how people react to the mixed twins, Tracy-Ann said the reaction is always shock; they want to know if the babies are Andrew and Tracey-Ann’s and they always question if they’re twins or not. While the parents can’t blame anybody for being confused by the anomaly, you have to imagine that gets old after a while!

Despite this rare birth, both Orlando and Natalia are perfectly healthy, happy babies. Their parents, you can tell, are over-the-moon about their newborns, as they can’t take their eyes off the babies the entire interview. They can hardly wipe the smiles off their faces!

The twins not only seem like well-behaved, happy kids, but they’re also adorable with each other – at one point, our hearts absolutely melted as the sister and brother hold hands. We hope this is a good indication that the two will grow up to be the best of friends.

What do you think of this rare childbirth? Share your thoughts in the comments section below.