The Transformation of This Messy Room Is Incredible

We’re always on the lookout for great organizational tips, and every single one of us has had at least a semi-messy room in need of a serious makeover. Still, we doubt that many of us has faced a challenge as daunting as the one involving the room pictured above!

Seriously, look at that photo up top again. That’s the bedroom of twenty-something Christina, a college graduate who moved back home with her mother, Mary Ann, in Garden City, New York. In the video below from The Rachael Ray Show, Mary Ann describes her daughter’s room as a “disaster,” and we have to say, that’s a bit of an understatement! There’s so little room in the space, in fact, that Christina mainly uses it for storage, and has to sleep on the floor of her younger brother’s room.

Christina explains that the mess began when she moved back home after college, and suddenly her “home stuff” and her “school stuff” were combined into one room. She’s been so overwhelmed that she doesn’t know where to start, frozen in inaction while the pile only grows. 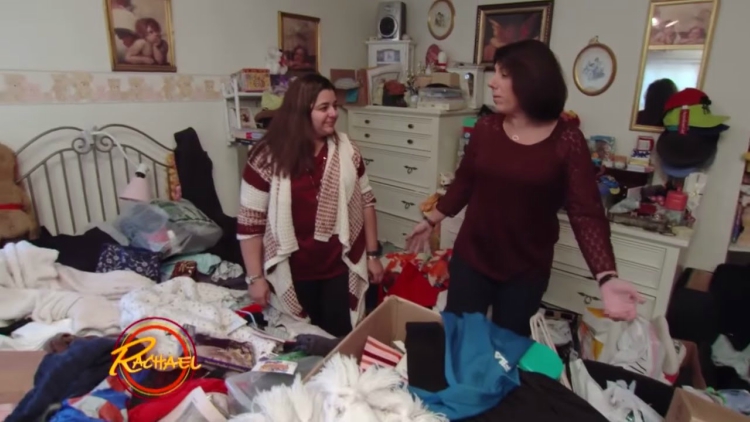 Thankfully, Mary Ann finally had enough and reached out to Rachael Ray, who in turn sent organizational master Peter Walsh to help. Walsh not only demonstrates how to organize any bedroom, he shows us that no matter how big a disaster a room can seem, you CAN get it under control by following some simple steps and tips.

These smart and simple steps can help any of us— even those of us with much smaller messes than Christina! To see how Peter Walsh manages to apply these tips to her room and to see the incredible transformation, check out the video from The Rachael Ray Show below. Seriously, you won’t believe it’s the same room!

What do you think of this bedroom transformation? Have you ever needed to clean out a room this overcrowded, or would you die before you let a room get this way? Do you have any of your own organizational tips to share?