What would you do if you were wandering around outside and suddenly a refrigerator filled with cold brewskies appeared?

Honestly, we’d kind of think we were hallucinating. But luckily that wasn’t the case for Kyle Simpson and Gayland Stouffer. These two workers were cleaning up outside after the heavy rainfall and record flooding that recently occurred in Nebraska, when this exact thing happened to them.

The two were clearing out some brush when one of them noticed a black box of sorts in the distance. They couldn’t tell what it was, but when they got closer they realized it was a fridge.

Confused as to what a refrigerator was doing in the middle of Butler County, they opened the door and what they found inside was truly shocking. We can imagine they saw the clouds part and the angels sing…

…It was a stack of ice-cold Bud Lights Busch Light beers was awaiting them.

“It was quite unusual to find a full fridge of beer lying in the field,” Simpson said.

They definitely deserved a few cold ones after slogging through mud and murky water up to their waist. It was “a gift sent from the heavens,” said Simpson. But it was still a pretty strange way to get it, and they couldn’t help but wonder where it came from.

“We thought about the poor guy who lost it and hoped he was OK,” Simpson said.

After cracking open a few beers, the two sent a few photos of themselves posing in front of the “magic beer fridge,” as one commenter referred to it, and their friend posted it to their Facebook page. 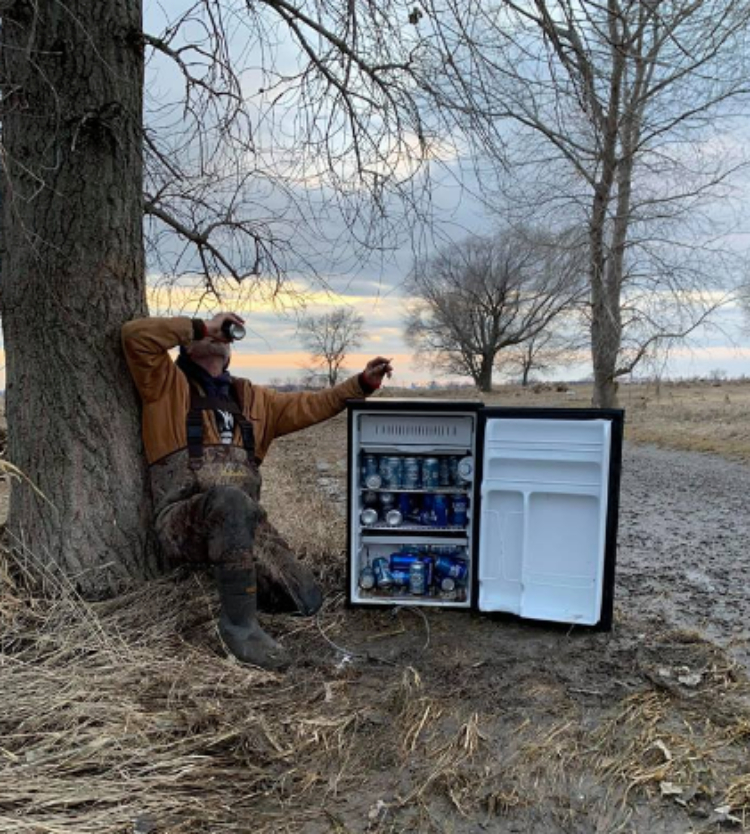 “The flood left plenty of damage but also left a surprise….” they wrote in their caption.

A few hours after the photos were made public, the owner, Brian Healy, caught sight of it and claimed the fridge. Of course, the workers promised to return the fridge once the flooding damage was cleaned up more—it just might be a bit lighter than it was originally.

But let’s talk about the elephant in the room: How the heck did a stocked beer fridge get to be in the middle of a field?

Apparently, it had floated over three miles from their home during the floods. What a survivor!

“I couldn’t hardly believe they found it all intact,” Healy said. “The pictures really made me laugh.”

“It’s nice that somebody can smile about this story,” Simpson added.

Though this is something to giggle about, and we’re glad these guys got a fun break they deserved, but the floods in Nebraska and other parts of the Midwest are certainly no laughing matter. At least three have died along with widespread property damage—an estimated $1.3 billion in damage over all.

“I don’t think there’s ever been a disaster this widespread in Nebraska,” said Gov. Pete Ricketts.

What do you think of these two finding a random beer fridge in the middle of a flood cleanup? Can you believe it floated out of someone’s house and still ended up in tact? What would you have done if you were in their shoes?