Meghan Markle Makes Her First Official Appearance with the Queen, but All the Buzz Is about Her Outfit

Let’s face it, all eyes have been on Meghan Markle since she and fiancé Prince Harry announced their engagement back in November.

But all eyes were really on this royal-to-be during her recent appearance alongside Queen Elizabeth during a Commonwealth Day service. The occasion, which was held at Westminster Abbey in London, honors the queen’s commitment to the Commonwealth, which is comprised of nearly 2.4 billion people across 53 countries.

Up until this day, Meghan hadn’t been to any official public engagements with her future grandmother-in-law (though she did spend Christmas with her, which was the first time a non-royal was invited to participate in their celebrations). So this was Meghan’s first official appearance alongside Queen Elizabeth—a pretty big deal as far as becoming a royal is concerned.

And yet, the notion about this day that most made headlines wasn’t the fact that this was her first official appearance with the queen. In fact, it was her choice of outfit, and where the inspiration for that came from. We agree: it was a pretty special homage she paid.

The meaning behind Meghan’s Commonwealth outfit

Meghan always dresses well, but this time something about her ensemble choice was even more special than usual. For this particularly event, she decided to don a white coat that covered a lovely navy dress. She paired this look with a chic white beret and blue heels.

But these pieces were far from your standard coat and hat.

So sweet right? We’re not the only ones who think so. Hundreds of people took notice of this and actually got pretty emotional about it, especially after seeing CNN Reporter Kate Bennett’s sweet tweet about it. 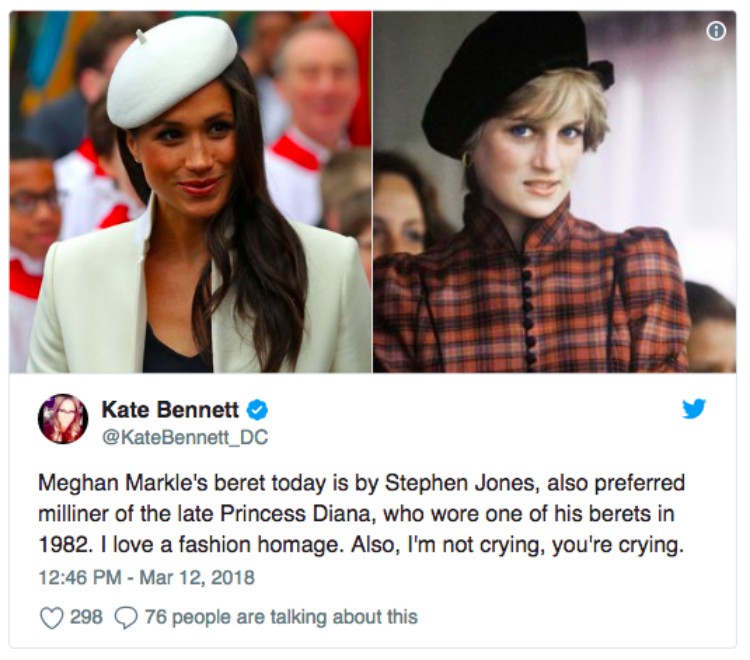 We like to think that Meghan was indeed paying a ”fashion homage” to the woman who would have been her mother-in-law.

This isn’t the first time Megan has paid homage to Princess Diana. The late princess famously left some jewelry to both her sons, Harry and William, and Harry actually proposed to Meghan with a ring involving some of Diana’s pieces.

Prince Harry designed the gorgeous engagement ring himself, which features one large diamond flanked by two smaller ones on each side. The other two diamonds came from Princess Diana’s sapphire brooch, which she later had refashioned into a choker to suit her style. Whenever the two look at the ring, we’re sure they know Diana is with them in some way.

We can’t imagine losing a parent so young, especially in the tragic way Harry and his brother, Prince William, lost theirs. We love whenever we see people paying homage to Princess Diana, especially when it’s done in such subtle, unique ways. Meghan honoring Diana in that same subtle way definitely makes us tear up!

To see Meghan’s full outfit choice during the Commonwealth Day service, be sure to watch this video below!

What do you think of Meghan honoring her late mother-in-law by wearing her favorite designers?