His name is Russell O’ Grady, and he started his career at McDonald’s in 1986. He also happens to have Down syndrome. At age 50, Russell has just retired after an amazing and memorable 32 years.

At just 18 years old, Russell began the job that would last him his entire professional career. With absolutely no work experience, the Northmead McDonald’s in Sydney, Australia still took a chance on him and, boy are they glad they did.

The fast-food chain was immediately impressed with Russell’s dedication and perseverance, and, after over three decades, he’s become one of the top faces customers love to be greeted by. He’s been described as a “local icon” or “dearly loved” on many occasions, and people sometimes even ask for him by name.

It’s all thanks to Jobsupport, a program that helps people with intellectual disabilities find paid work, which helped him get the job. In fact, back in the 80s, people with Down syndrome or other disabilities were rarely employed, and Russell was one of the first people to be able to use the program.

Other people who worked with him at Jobsupport had so many good things to say about Russell. “Russell’s impact on people in his community is without a doubt exceptional,” Jobsupport assistant manager Wynn Visser said. 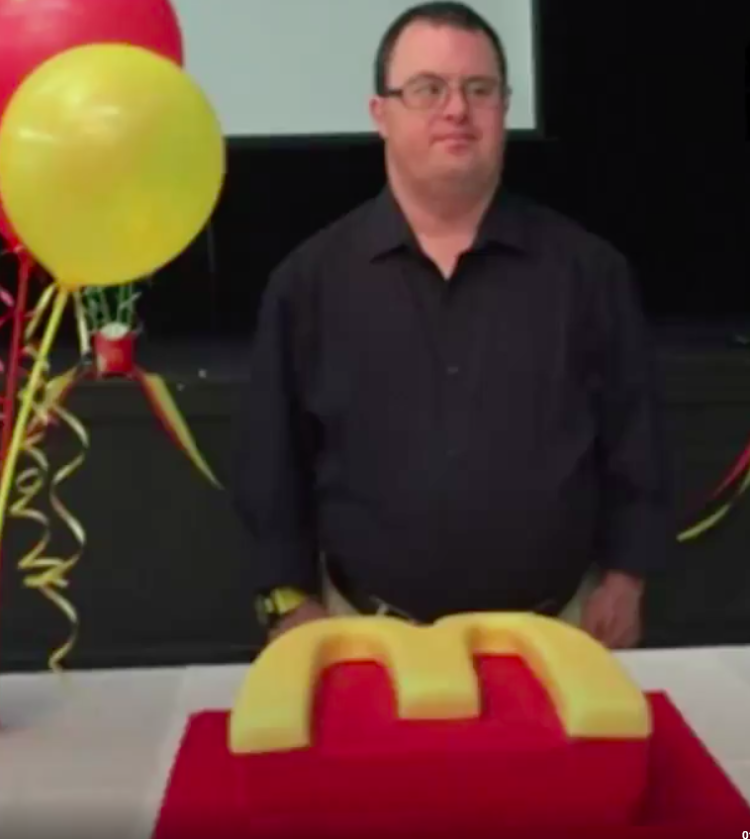 Two years ago, Jobsupport actually threw Russell a party as a celebration of his 30th anniversary working at McDonald’s. He’s very loved by the community.

“We have to really start with thanking McDonald’s, and their insight, and Jobsupport, and the people supporting Russell throughout the years,” said Russell’s father, Geoff. “Because without the initiative, lots of people like Russell wouldn’t have the jobs that they do today, and they wouldn’t have the reward it gives them, which is a pride, a boost to their self-esteem.”

Russell’s brother also had all good things to say about Russell: “He’s kind of blasé about it but loves his work very much. He’s pretty cheeky sometimes. He’s my big brother and he keeps me in line,” he said.

So what will Russell do now that he’s not surrounded by burgers and fries all day? He’s reportedly going to spend some time doing dog therapy and playing tenpin bowling, one of his other passions.

We’re so glad Russell was one of first people to change the stereotype about people with intellectual disabilities get and hold a career. He’s living proof that it’s possible.

If you’d like to hear more about Russell’s story, check out the video below.


How sweet is this story? What advice would you give Russell for retirement if you could talk to him? How long have you ever kept a job? We can’t imagine working at the same place for over three decades, but we admire Russell’s dedication!