Some might argue that mashed potatoes are one of the staples of modern cuisine — and if that’s not quite true to you, then at least you’ll concur they’re  certainly one of the best parts of your Thanksgiving spread. I think we can all agree on that.

We can probably all also agree that our beloved mashed potatoes are best when they’re extra fluffy. Gooey, pasty consistencies aren’t going to fly for mash potato aficionados. 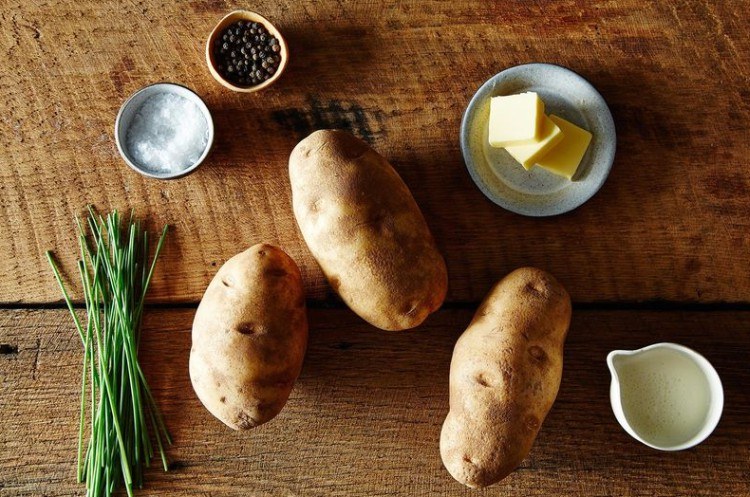 Food52
But what’s the best way to get those fluffy tots you crave? Is it the type of potato you use or the things you choose to add to the mix, like cream? While these factors might play a part in how your potatoes come out, Food52 was curious to get right to the core of the issue: how mashing affects your potatoes.

You might think there’s only one way to mash potatoes, but there are actually multiple techniques you can use to get the expected end result. The real question is, which one of them works best?

Well, Food52 went to work, experimenting with four different types of mashing to see which one created the fluffiest mashed potatoes. Which one do you think worked best? 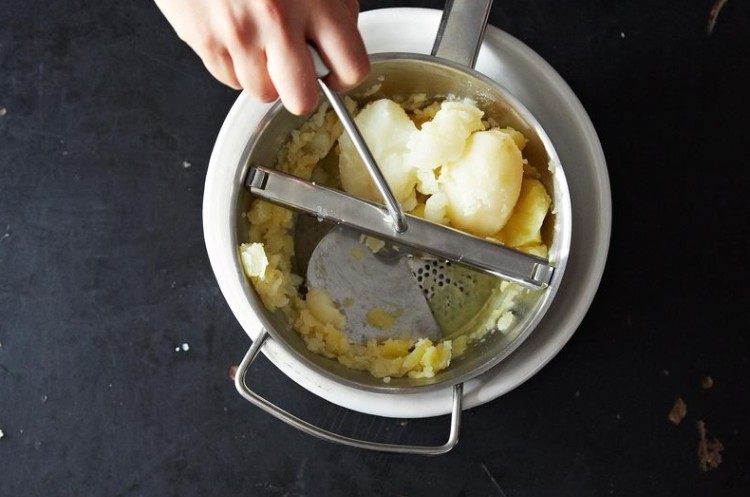 Food52
A food mill is a food processing tool that simultaneously sieves and mashes soft foods, such as potatoes. Using a crank, you force the food through the small holes on the bottom plate, producing what looks like the work of a ricer.

The potatoes that put through the food mill were the smoothest of the bunch, so airy that they’re scooped easily with a finger, so light they dissolve in your mouth without any chewing on your part. You’ll see in the photo that the milled potatoes are so smooth and satiny that they look more like potato ice cream than anything else.

The Food52 team called the milled potatoes the “lightest” of all the potatoes, but they also commented that the potatoes tasted “bland,” “ricey,” and “grainy,” with “not so much flavor.” 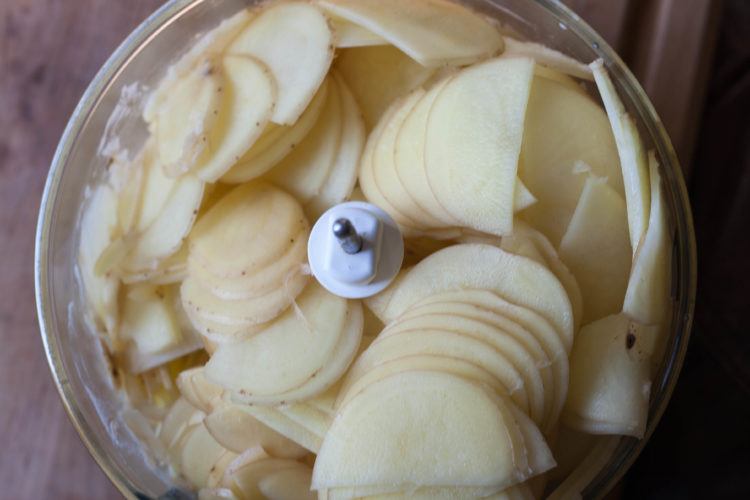 Dirty Laundry Kitchen
The potatoes blended in the food processor had the stickiest, gluiest consistency of them all — to the point where it was difficult to even spread the scoop of potatoes.

While some Food52 tasters called the food processed potatoes “gluey” and “sticky,” others said they were “rich and buttery,” “custardy even,” and “not bad” (though “not the best“). If potatoes with more of a peanut butter-like consistency are your thing, then the food processor is the tool for you. 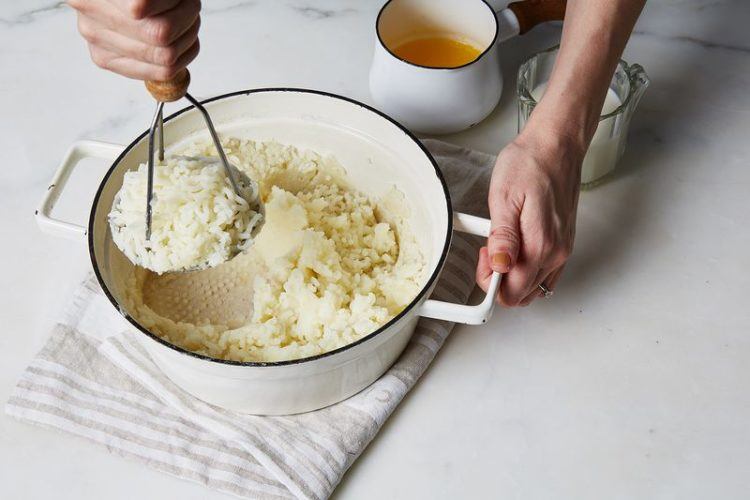 Food52
The potatoes mashed by hand had creamy lumps and were rich but not overwhelmingly dense. Food52 tasters said they were the “saltiest, just like they should be”and had a “delicious butter flavor,” although no additional salt or butter was added for this method.

The best mashers for these delicious results are those with a flat face, a grid pattern and crisp edges where the potato meets the masher. These mashers mimic the extrusion effect of a ricer, producing fluffy mountains with a minimum of lumps, butter, and physical exertion. 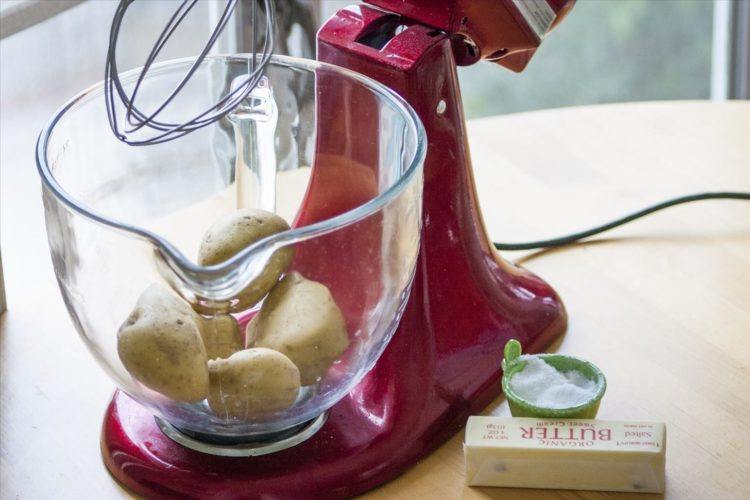 Food Hacks
Stand mixers aren’t just for making dough and whipped cream, they can make mashed potatoes, too! As you work the potatoes with the machine force of a stand mixer, they go from light and fluffy to dense and creamy.

If you like potatoes on the thicker side, a stand mixer is the way to go. Just watch carefully and stop when the potatoes are silky-textured—before they become gluey.”

The Food52 team was not a big fan of the electrically-mixed potatoes, calling them “bland,” “blah,” and “meh,” with “one vote for the worst.” They claimed this method combined the fluffiness of the food mill with the lumpiness of hand mixing.

However, one serious up side to this method, the flavor of these potatoes may have been the richest of all; it was as if extra buttery flavor was coming through. 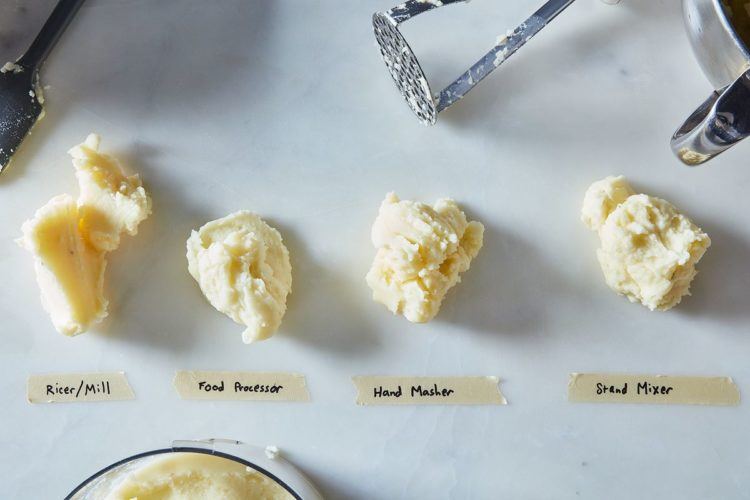 What do you think of these test results? Is there a favorite way that you mash your potatoes? Share your thoughts in the comments section below.