There are few things more frustrating than sitting in a traffic jam. Seriously—what’s more annoying than that? Banging your funny bone? When the WiFi goes out? A root canal at the dentist? Literally nothing is worse than unmoving cars.

No matter where you’re going, being in traffic just does something to our souls. And it makes us angry. “GO!” we shout as we beep our horns at the car in front of us.

Needless to say, your mind can run rampant when you’re sitting there without anything else to do.

But did you know there are actually some smart ways to drive in traffic? For one, there’s something called the “zippering” technique. “The right lane goes and the left lane goes, it means they are cooperating,” said Sam Schwartz, a renowned traffic engineer who coined the term “gridlock.”

When you argue over who goes first and who goes second, you don’t actually  get anywhere. “Had they all been polite to each other, we would have been moving a lot better,” he says.

Schwartz also recommends avoid tailgating, braking suddenly, and weaving in and out of lanes. We may feel like it’s helping the situation, but it’s actually not. 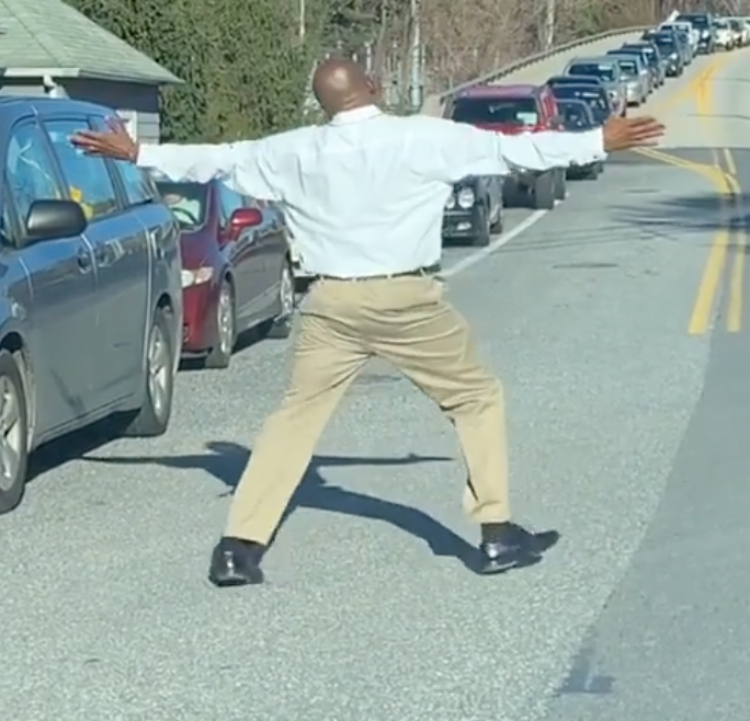 Something Schwartz didn’t recommend, but worked for one man? Singing and dancing your heart out in the middle of the street.

One man who was caught in traffic on Falls Road in North Baltimore was probably pretty annoyed about it—but that was the last thing he showed.

The man decided to make good use of his time just sitting in the car and get out and make the others in traffic laugh. He started dancing around in the street like he was breaking it down at a club!

The woman who caught the whole thing on camera when she was driving by posted it on her Facebook with the caption, “I couldn’t make this up if I tried.”

This guy has us absolutely cracking up—we can’t even imagine what it would’ve been like if we got to see his moves in person, smack dab in the middle of a traffic jam.

We’re sure everyone in the cars behind him were cracking up. Who knows, he might’ve even made their day in such a small way!

Moral of the story? Don’t sweat the small stuff! Traffic stinks, but there could be worse things in the world, and this man is teaching us to just breathe—or dance—and life will move forward!

To check out this man’s hilarious dance skills while stranded in traffic, check out the video below.

What do you think of what this man decided to do while he was in traffic? What’s the funniest thing you’ve ever witnessed while you were sitting in a car?