Man Punches a Kangaroo in the Face to Save His Dog

Kangaroos seem like one of the more harmless creatures that live in the wild; they’re herbivores, after all, and don’t really have a violent reputation associated with them. Face it, if you had to come face-to-face with a lion or a kangaroo, odds are you’re going to pick the kangaroo. You’re much less likely to get eaten by the latter, right?

But while kangaroos might not be out to hunt humans, that doesn’t necessarily mean that they’re gentle creatures all the time.

Those two back legs that we recognize as the kangaroos’ main jumping power are extremely powerful; they’d certainly have to be to propel the 200 pound animal. And their legs aren’t just used for getting place to place, they also act as the kangaroos’ most powerful weapon.

When fighting one another for mates or territory, male kangaroos use their strong back legs to attack one another. They also use these secret weapons to fend off attacking predators.

This might not seem all that scary when compared to the teeth of a crocodile or the constricting powers of a boa, but this one-two punch from a kangaroo can prove fatal. The power behind those back legs can easily kill another kangaroo or an attacking animal, and this also holds true for us humans.

Kangaroo killings are very rare, but they have been known to happen in Australia when humans try to tussle with this less-than-gentle animal. Standing at 6 ft. tall and often weighing well over 200 lbs., the policy in kangaroo-populated areas is to avoid conflict with these creatures.

However, sometimes they’re hard to avoid. 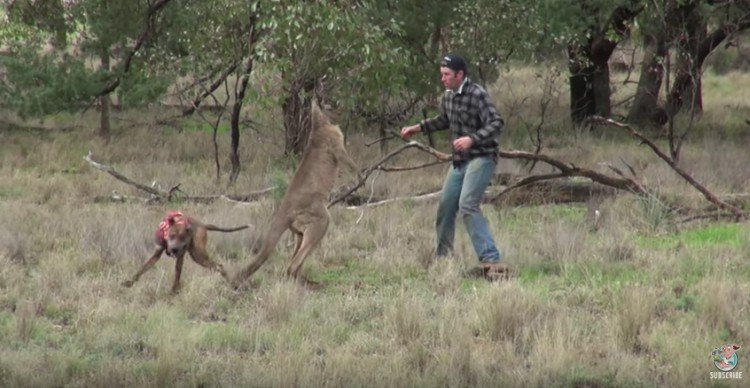 ViralHog
That proved to be the case with this man, zookeeper Greig Tonkins, who was on a boar-hunting trip with a number of his friends in June 2016. The group was there to support Kailem, a 19-year-old who had been battling with Ewing Sarcoma for years. Kailem was not doing well in his struggle and wanted to catch a “tonner,” a.k.a. a wild boar weighing in at around 220 lbs. before the disease progressed.

Tonkins’ dog Max was assisting on the hunt when he got caught in a headlock by a rather large male kangaroo. When the truck with Greig and his friends pulled up, Greig immediately ran from the vehicle to help his dog escape this potentially dangerous situation.

When Greig charged the kangaroo, the animal let Max go immediately. But then he turned his attention to Greig.

Pulling himself up to his full 6 feet of height, the kangaroo prepared to land a deadly blow on the pet owner – when Greig quickly punched the kangaroo right in the face! The animal looks completely stunned by this attack and Greig prepared for a retaliation that never comes.

After a moment, Greig rallies up his dogs and heads back to the van. The kangaroo watches, still clearly in shock, and then decided the fight isn’t worth it; he hops away into the wilderness.

Happily, Max was perfectly fine and Greig managed to escape this potentially deadly encounter without a scratch! But what incredible face-off that was.

What did you think of this video? Would you do this for your pet? Share your thoughts in the comments section below.