There are few things more entertaining than a live stream of animals, especially in places where you probably will never go. Take Brooks Falls in Alaska’s Katmai National Park and Preserve. Each summer, the brown bears of Katmai hunt for salmon in the water, and it’s such a cool way to see some circle of life action in real time, without having to pay for the airfare.

Well if you were tuning in on August 9, you probably were a little shocked to see a man get in the water—dangerously close to the bears.

The man enters the water in just a T-shirt and shorts and takes a few quick photos, plus some selfies of him and the bears at the top of the falls. He then gets even closer for some more picture ops, and then just walks out of the water like nothing ever happened.

I mean, that’s great and all that he was that interested in them and wanted to get some good photos, but this was a pretty risky, and dare we say stupid thing to do, not to mention illegal. You’re not allowed to get within 50 yards of a bear using a concentrated food source (like the salmon).

People watching the live cam on explore.org, as well as people who witnessed it when they were visiting, reported the incident to Katmai rangers.

The man, as well as two others who were with him (just not on screen), are currently facing pending charges. More details on their identities will be released once charges go through and are finalized. 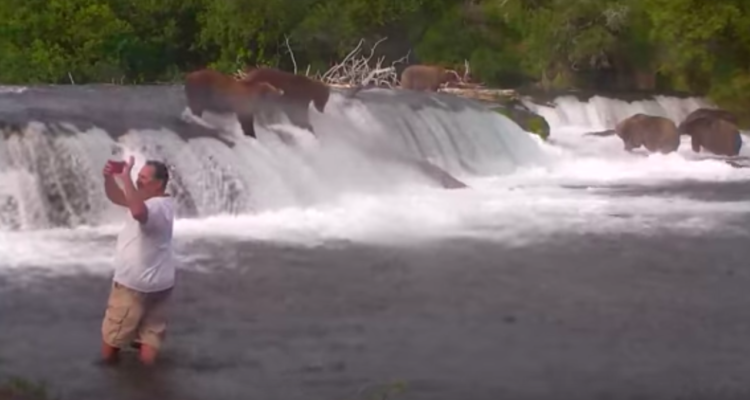 “People need to recognize that these are wild brown bears. These visitors are lucky that they escaped the situation without injury,” Mark Sturm, NPS superintendent, said in a press release. “The possible consequences for the bears and themselves could have been disastrous.”

We’ve heard of people “doing it for the ‘gram” and taking selfies with cool things or animals just to get a lot of likes but this one was far from agreeable! The outcome could’ve been a lot worse than it was.

In fact, researchers from Carnegie Mellon University and the Indraprastha Institute of Information Technology (IIIT) in New Delhi actually studied dangerous selfies—or “killfies,” as they called it. The researchers found accounts of 127 reported deaths by selfie between 2014 to 2016 with some of the causes being taking selfies with wild animals, on railway tracks and in moving vehicles.

Pretty crazy, huh? We’re glad at least in this case, it wasn’t as bad as it could’ve been, but we still hope this man learns his lesson after his charges go through.

To see the selfie incident caught on camera, check out the video below.