Two Years Ago She Was Almost 650 Pounds, Today Her Life is Very Different

Let’s be honest— losing weight is never an easy feat for anyone. Whether the issue is due to overeating, lack of exercise, or physiological problems, shedding those stubborn pounds can be a particularly trying journey, even for the most strong-willed. So, if you are in the midst of a frustrating diet/exercise plan and need some motivation, boy, do we have some for you today!

Meet Nikki Webster, a woman who was featured on TLC’s hit series My 600-Lb. Life. When filming began on her episode, the Little Rock resident was tipping the scales at 647 pounds, a weight that put her in the potentially deadly “super obese” category.

Back in 2016, the then 33-year-old was practically immobile and housebound, having to rely on her parents’ support for everything from making meals to bathing to standing up. In an interview from her first episode, Nikki spoke about her daily physical struggles, as well as her sense of isolation.

“My weight is debilitating,” Nikki lamented. “My body is so painful, I hate it. But I say this to myself: Food is an addiction and my addiction is killing me.”

Why Nikki decided to reclaim her health

It was clear that the Nikki was ready to make a change—and she did so by finally accepting the help that she needed! During filming, she was surgically outfitted with a gastric bypass sleeve that doctors believed could help her lose hundreds of pounds.

It goes without saying that invasive surgery, particularly when performed on an individual who carries so much extra weight, can be dangerous, and even deadly.

In fact, in a later TLC special, Nikki revealed that her best friend Michael had passed away due to complications from his gastric bypass operation. She went on to say that his death still “haunts” her today.

Nevertheless, the intrepid Nikki soldiered on and went ahead with the surgery. Now, almost two years after the initial operation, her life is very different. She’s no longer confined to her home… 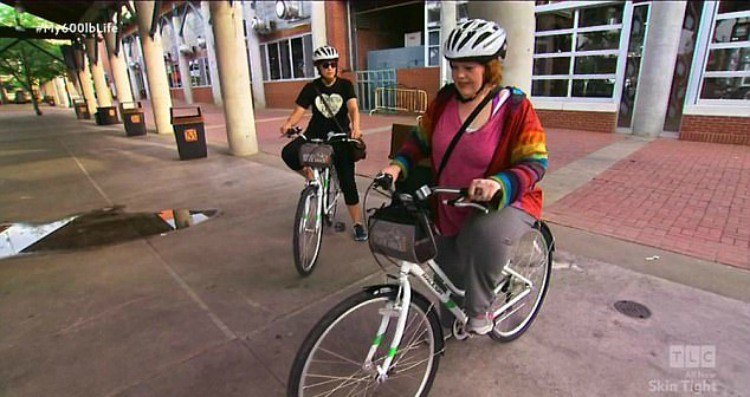 TLC via The Daily Mail

…because she is 455 pounds lighter!

That’s right, Nikki Webster is down to 194 pounds! Her body has changed so much; she is now finally able to fit into a pair of jeans. The transformation is absolutely incredible, especially considering her doctors thought that she’d be lucky to live another year at her former weight.

Today, Nikki is like a whole new woman, going on dates, working out regularly, and even riding around on her bike. It just goes to show you that it’s never too late to make a change!

To get a very personal view of what her life was like pre-weight-loss, be sure to watch TLC’s video below. The short clip perfectly sums up how far Nikki has come in her journey. You go, girl!

We’d love to hear your thoughts on this inspirational weight loss story! Were you surprised that Nikki lost as much weight as she has so far? Have you lost a substantial amount of weight? If so, how did you go about doing it?