Watch This Homeowner Turns a Dying Tree into a Gorgeous Little Library!

Over the past decade or so the phenomenon of “little libraries” has been sweeping the nation. These small cabinets filled with books can be seen everywhere from gas station parking lots to deserted rest-stops to bustling city centers. The idea is for every person, regardless of their location, to have access to books. The reader can take the book, then drop it off at the next “little library” that they encounter. One Washington resident decided to take a sad situation and turn it into a positive one by providing her community with one of these tiny wonders.

Sara Sanders always loved her giant cedar tree. She tells KOMO News, “I bought the house because of the tree; It was a big factor.”

Unfortunately, the old tree started to eventually rot and lose limbs. The city of Everett forced the homeowner to remove the dying tree from her property. Of the order Sanders says, “It was deteriorating to the point where it was dangerous.” Sanders, who greatly cherished her tree, said that she was “devastated” by the news

While grieving for the loss of her beloved giant cedar, Sanders had an “a-ha moment.” She started brainstorming ways to pay tribute to her fallen tree while still making the area beautiful and useful. So, she started making her plans. “I have been interested in little libraries for years and thought this would be the perfect place to have one.”

She enlisted Larry Carter, a local master woodworker, for help on this project. Though Carter had spent a great deal of his career making works of art out of wood, he had never cut down a massive tree and made it into a library. “I had no idea how I was going to go about it,” the carpenter recalls. When the time came, Carter took a chainsaw to the tree and began the process.

The library itself is built from the stump of the original cedar tree. Along with the cabinet, Carter decided to feature his signature wildlife carvings of bears on the posterior areas.

He even carved in a raccoon as a consolation for a neighbor’s fence that Carter broke in the process of the build. The woodworker named it Rocky, after the neighbor. Hopefully the poor guy received a check in the mail, too! 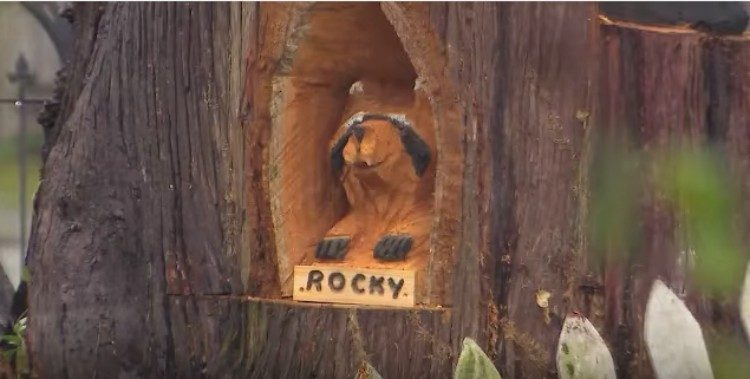 Amazingly, this “little library” is starting to catch on like wildfire. “I was not the first one to put a book in here. I’ve seen somebody with a flashlight trying to find a book, so it’s used all the time.”

Though Sanders says that she still misses the tree, she is quite happy to use her property to serve the community in a positive way.

Check out the video below to see just how beautiful this project turned out to be.

Have you ever used or donated to a “little library?” Do you have any woodworking tips? What’s your favorite feature of this project? Tell us all about your thoughts and stories in the comments section below.