Imagine living without some of these basic human necessities: food, water, sleep. Before you jump into thinking this is some sort of public service announcement, consider that last one – sleep.

For some of us, it’s a commodity. Insomnia and crazy schedules can rob us of a good rest. But for one little girl, sleep is virtually non-existent. Barcroft TV introduces us to 3-year-old Ever and her parents Robin and Kirk Hisko, a family living without much sleep.

Getting lots of sleep is something that health professionals have been drilling into us for ages. It’s simply not a possibility for Ever. When her parents brought her home from the hospital, they noticed something was off with the baby.

Upon a newborn doctor’s visit, Ever was admitted to the hospital and they learned she had G.E.R.D. The severe acid reflux condition warranted the baby being prescribed medication. Once she began the meds, Robin and Kirk noticed an immediate difference in Ever’s eating habits; things were smoother.

Robin shares how happy Ever was during those first months, but she wasn’t reaching developmental milestones. The concerned parents weren’t sure whether to attribute it to a bumpy first year or another cause. It became clear right after Ever turned 2, when she was diagnosed with Angelman Syndrome. 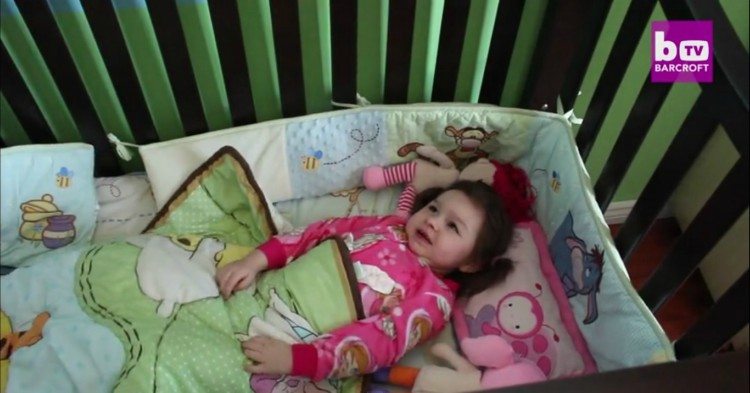 Barcroft TV
A rare genetic disorder, Angelman Syndrome affects children and young adults. The Angelman Syndrome Foundation cites the incidence rates to be somewhere between 1 out of 12,000 to 1 out of 24,000 live births. Characterized by a number of symptoms like developmental delays, an unsteady gait, frequent laughter or smiling, or lack of speech, the disease is often mistaken for autism.

Also on the list is an extra-happy personality and abnormal sleep patterns. Ever can function with minimal sleep that lasts an hour and a half at night. Mom Robin admits that going without sleep as her full time caregivers can be a challenge sometimes, but says they are doing great if they all can get in 4 to 6 hours per night.

By age 2, Ever still hadn’t uttered her first words, and Robin and Kirk were told that it’s possible she may never talk. However, they are hopeful and optimistic that the adorable little girl will speak someday. With all those sweet giggles, we’re hopeful too!

Currently, treatment for Angelman Syndrome targets behavioral or medical issues. Research into the disorder has yielded many breakthroughs but so far no cures – yet. For people living with Angelman Syndrome, lifelong care is required, and Robin often thinks about Ever’s future without her and Kirk.

For now, Ever is surrounded by love and her parents remain positive about a cure being found in her lifetime. Robin lovingly states that finding one would make life easier for Ever as she grows up. Click on the video below to meet the little cutie pie and her devoted parents.

What do you think of Ever’s unique story? Are you familiar with Angelman Syndrome? Are you the caregiver for a loved one with a rare condition? Share with us in the comments!