Shedding those stubborn pounds can be a tough chore—especially when you have plenty to lose! So, if you are feeling down and are in need of some serious weight-loss inspiration, look no further than today’s story. These two young people are living proof that getting healthy isn’t about following a gimmick; it’s about support, endurance, and most of all, drive!

When Indiana husband and wife Lexi and Danny Reed first started dating back in 2007, the two, admittedly, loved their junk food. In an interview with TODAY, Lexi remembers visiting her local Chinese buffet, sometimes eating as much as eight plates in one sitting. Together, the two would regularly snack on high-calorie foods like pizza, chips, candy, and soda.

It wasn’t until the young couple made a life-changing New Year’s resolution, just last year in 2016, that they took the dietary plunge in hopes of making some drastic transformations. Lexi says that, initially, her biggest motivator for losing weight was that she didn’t want to miss out on the opportunity of having children.

Lexi acknowledges that she “could never be a mom at that size,” so she, alongside her husband, decided to embark on a healthy journey together. Here’s how, and why, they did it:

Interestingly enough, both Lexi and Danny were driven by the desire to have children, but they initially got started after receiving a dare.

You see, a friend of theirs found a creative way to support them, by challenging the two to quite a tall order—no alcohol, no eating out, and no having a cheat meal for an entire month. Believe it or not, they actually took that difficult dare, and ended up flourishing.

From there, they started going to the gym, and though Lexi was having trouble performing high-intensity exercises, she still made sure that she got at least 30 minutes of cardio in at least four times a week.

It’s also important to note that Lexi and Danny didn’t subscribe to any sort of fad dieting; they simply switched out their fast food for veggies and lean meats, like salmon and chicken. Pretty simple, right?

Now, get this—after working out this way for over a year, the couple has ended up losing an extraordinary amount of weight. In fact, so far the dynamic duo has lost about 300 pounds put together, with Lexi losing 236 and Danny losing 62.

And though the 26-year-old Lexi and 28-year-old Danny are proud of their physical transformations, they say that it has also done wonders for their marriage. Danny explains, “This helped our relationship a lot and that is pretty cool. Us being able to do stuff together has brought us closer together.” 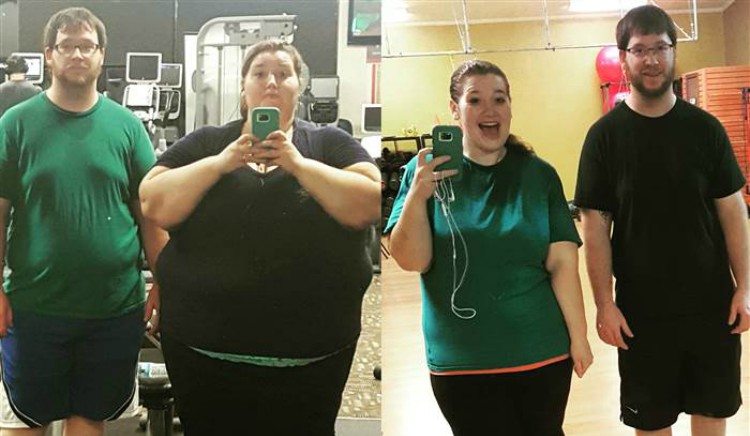 Lexi Reed via TODAY
The results speak for themselves—the two look absolutely fantastic and SO much healthier than they did before. Go, Lexi and Danny! We are rooting for you both!

What do you think of this couple’s transformation? Have you ever lost a large amount of weight like these two? Do you have any weight loss advice? Tell us all about your thoughts and experiences in the comments section below!