If you’ve ever gotten a check-up recently, you’ve probably had your doctor remind you to check your breasts for any lumps that might detect breast cancer. It’s something women, and even men, have heard many times before.

However, there are a few reasons why this isn’t the best way to go about protecting yourself. First, telling someone to check for something like a vague “lump” often doesn’t mean you’ll be able to easily distinguish what might be cancer.

Lastly, what is a lump anyway? How big does it have to be? What about the texture? The size? It can be pretty difficult hard to find images online of what to look for since it’s on such a private area on your body.

That is, it used to be hard, until a brilliant woman named Corrine Ellsworth Beaumont, who works for the nonprofit Worldwide Breast Cancer, created an image that solves all of these problems and have helped many women detect and survive breast cancer. See it below. 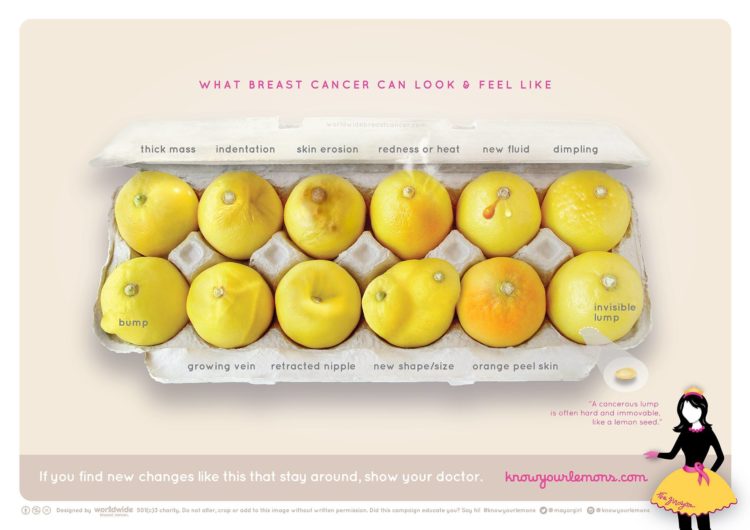 The image, titled “What Breast Cancer Can Look and Feel Like,” displays 12 lemons that mimic breasts, and not only show exactly what kinds of lumps to look for, but also depict some of the lesser-known symptoms of breast cancer—things like growing veins, dimples, fluid, etc.

Additionally, Beaumont outlines symptoms of what breast cancer might feel like as well, including flashes of heat, invisible lumps, and thick masses.

Last year, the image helped survivor Erin Smith Chieze diagnose herself with breast cancer. After finding and sharing the photo of the lemons, she explained how it saved her life, and it received nearly 50,000 shares.

“Someone once posted a picture on Facebook of what breast cancer can look like. Not feel, but look like,” Chieze said. “In December of 2015 when I saw an indentation that looked like one of those pictures, I instantly knew I had breast cancer. I tried to feel for a tumor, but my tumor was non palpable.”

Chieze explained that while it’s nice that people like to support patients by sharing hearts and pink ribbon for breast cancer awareness month on their social media, people don’t realize that those things aren’t quite doing much to help people who actually have breast cancer.

“A picture of what to look for keyed me into knowing I had a terminal disease,” Chieze said. “Without having seen a picture randomly with real information, I wouldn’t have known what to look for.”

“Do us a favor, stop playing games with my life and start truly helping people. Metastatic breast cancer treatment research and real awareness,” she added.

Well if that isn’t a wake-up call, we don’t know what is! Be sure to share this photo of the lemons to help people who may have breast cancer. Additionally, you can donate to World Breast Cancer and help support research and cures for this terrible disease.

Do you know anyone who has survived breast cancer? What do you think of this photo of lemons that depicts the symptoms?