Here’s a Hack to Prevent Foggy Windshields That Actually WORKS!

With winter comes a host of uncomfortable driving situations, from icy roads to freezing-cold steering wheels to – a big hidden danger — foggy windshields. There’s nothing scarier than soldiering down the freeway during blizzard conditions, only to realize that the little visibility that you have is quickly disappearing.

Luckily, there are ways to clear the air, so to speak, even after you’ve hit the defrost button. In a clip that was featured on The Doctors, the ever-helpful (and handsome!) Dr. Travis Stork provides us with a fog-busting hack that really took us by surprise.

He says that the best way to stop the problem in its tracks is to ask your cat if you can borrow some of its kitty litter. Once you tell them why, we’re sure they’ll “meow” their approval.

You see, silica kitty litter—the kind that looks like it’s made out of pretty crystals—actually does a fantastic job of wicking away moisture. It’s great for cat boxes because it absorbs the wet spots, but the sodium silicate granules are also known to work as tiny dehumidifiers.

Now, we know that you are likely rolling your eyes at this one—kitty litter in a car? REALLY?!

Well, we were skeptical at first, too, especially considering we were so concerned about the possible mess that it could make if we took too sharp of a turn. Luckily, that scenario has already been addressed—quite creatively might we add.

Dr. Stork recommends taking a pair of old socks and using them as a protective vessel for the silica kitty litter. This will do two things—keep the crystals from spilling everywhere AND release the moisture-blocking properties into the air.

Wrap the tubed end of one sock around a large tape roll and pour the litter in before securing its open end with the other sock. Once you’re all finished, simply tie the end of the top sock together in a knot. 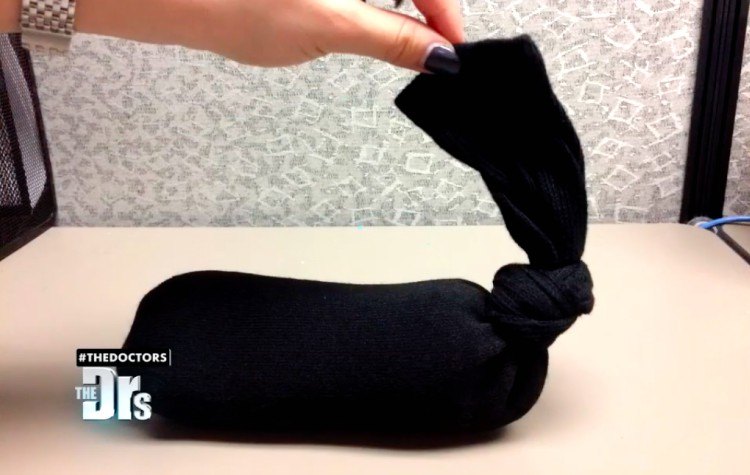 We find that this hack works well when the sock is left on the dashboard overnight, but you can use it anytime—even while you are driving—for quick moisture absorption. Smart!

More ways to banish the fog!

Now, if the idea of pouring a bunch of cat litter into a sock weirds you out, you can buy a store-bought equivalent. Though reviews seem to vary from product to product, the ones that are made with silica gel seem to be the crowd favorites.

Also, it’s best that you opt for fresh air versus hitting that recirculated air button. If the conditions are cold, recirculated air that’s already chock-full of moisture may not do enough to break up the fog. Good to know!

To see what else Dr. Stork and the gang have to say about this clever hack, be sure to watch the video below. Who knew kitty litter could be so versatile?!

We’d love to hear your thoughts on this unexpected trick. Have you ever tried this before? If so, were you happy with the results? How do you prevent your windshield from fogging up?