One of the worst things that can happen in the middle of winter weather is the heater going out. Anyone who has ever experienced something like that knows it can reach crisis-level proportions. It can be especially worrisome when it’s nighttime and you have kids or elderly folks in the home.

Finding a trustworthy, reputable repair service to take care of the problem is a task in itself, as you want to find someone who won’t rip you off. But it’s cold. It’s an emergency. The job needs to get done in a hurry and space heaters will only cut it for so long.

When mom-of-two Bridget Stevens came home one evening and discovered her heat wasn’t working, she texted her husband for help. Their Pennsylvania home’s thermostat read 50 degrees Fahrenheit, but hubby Bobby wouldn’t be able to do anything about the furnace without seeing it. Because he was on military deployment for the National Guard, that wasn’t a possibility.

So, Bridget ended up contacting Betlyn’s Heating and Cooling, run by Paul Betlyn. He tried to walk her through some steps to get it back up and running, but to no avail. The repairman made a trip to the  family’s house that evening to try to solve the problem.

As Betlyn worked on the furnace, he and Bridget chatted away about the repairs. She mentioned how her husband was away for his deployment so they had difficulty trying to fix it on their own. Paul fixed the issue and then wrote up the bill. When Bridget looked at the invoice, she was in shock. 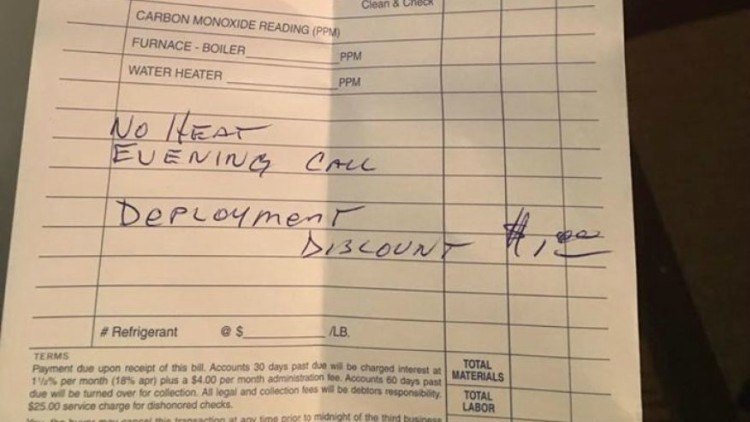 Fox News
Instead of charging her the full rate for the job, Betlyn gave her a “deployment discount” and wrote $1 was due. But even that turned out to be a friendly joke, with the repairs costing nothing. Betlyn deemed it as a thank you to Bobby Stevens for his service.

Bridget was overwhelmed with gratitude, and also took the time to post a public thank you to Betlyn and his business on Facebook. Soon, the story gained traction in national headlines. In an interview with ABC News, Betlyn stated he was taught to be community-oriented by his grandfather:

In the time since the story broke, Paul Betlyn launched a GoFundMe campaign to help finance travel costs for military families visiting their loved ones during deployment. It looks like he keeps giving back!

Bridget and her family were kept warm through the generosity and kindness of a stranger, and we’re sure that brought consolation to her husband too. Crisis averted! What do you think of this kind act? Have you ever been rescued during an emergency situation like this? Tell us in the comments!