This Dad’s Hack to Keep the Kids Calm is Genius

Being a parent is not without its many struggles and challenges. Getting the kids up in the morning, getting them ready for school, figuring out a time to pick them up, trying to get them to go to bed…you see what we mean. But there is no parental struggle more unique than driving with your kids.

While you’re trying to focus on driving (and most likely plan your entire day in your head) there are your adorable kids, crammed in the back seat. Most likely, they’re not sitting their silently, acting like perfect angels.

When I was a kid, my sister and I were prone to yelling, singing, and arguing in the backseat. It became our own personal playground on wheels, which was not so pleasant for our mother.

If that rings any bells for you, parents, you’re going to want to see this brilliant hack. 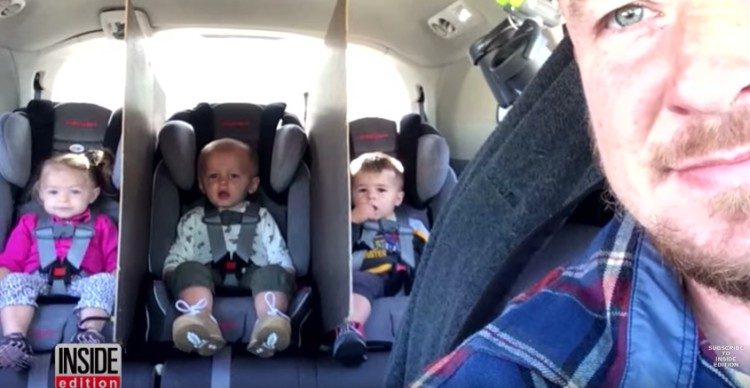 Ohio native Jack White, the father of adorable triplets, has come up with a genius idea to at least give him some peace while on the road. Two-year-olds Stella, Jude and Xavier usually fuss and fight during car rides, messing with each other and causing a lot of distraction for their driving dad.

To give the triplets their own space, their dad partitioned the three car seats with large pieces of foam to prevent them from getting rowdy. After his idea worked brilliantly, resulting in a quiet and fight-free car ride, Jack took a selfie so he could share his clever idea with the whole world on social media.

“They tend to get on each other’s nerves when they’re in the car,” Jack explained to Insider Edition. “So it just seemed sort of natural to come with a way to keep them separated. The car ride that day was pure joy.”

After he came up with the idea to cut the triplets their own foam partitions, they all immediately fell silent. This sounds like the car ride that every parent dreams of.

Was it that the kids weren’t distracted by each other, preventing a fight? Was it an out of sight, out of mind type of deal? Whatever it was that kept the kids quiet that day, Jack hasn’t gone back; he’s made the partitions a part of his daily driving routine.

The foam is something that can be easily taken in and out from between the car seats after each drive, and the material is nice and soft, so it won’t hurt the kids in anyway.

Honestly, we’re thinking that he should patent this idea! What parent doesn’t want a way to keep their kids from fighting in the backseat? This is such a brilliant hack for parents (especially parents of multiples) everywhere! We hope you get a little peace and quiet out of the idea.

What do you think of this parenting hack? Will you give this a try on your next car ride? Share your thoughts in the comments section below.