Elementary School Kids Built A Tiny House, And Who They Gave It To Made the Story Go Viral

When Eddie Browning and his wife Cindy had their house burn down in a fire, they were devastated. Heartbroken. And very cold, to say the least.

They were cold because they were forced to live and sleep in a small camper van, which was also damaged in the fire and not in the best of shape, throughout the winter in Georgia.

With no heat and having to be exposed to the outside a lot, it wasn’t a very comfortable experience for people who deserved much more.

And with no funds to help themselves, and unsure of what else to do, Eddie and Cindy continued to live like this for quite some time.

But someone–or should we say, a group of people–wanted to help. And you won’t believe who.

It was a group of elementary school children. Kids from Elm Street Elementary in Rome, Georgia, who banded together to help out this special couple when they saw a need for it.

The kids decided to build a tiny house for Eddie and Cindy to live in, one that could accommodate them much better than their broken camper. They were able to create a four foot by eight foot home for the couple to have, however, it didn’t have any plumbing or electricity.

Workers from Georgia Tiny House Festival at Ooh La La Lavender farms stepped in to help. They were able to make the home even bigger and better, expanding it to 240 square feet, and adding a bathroom, kitchen, and modern amenities to make the space even more comfortable. 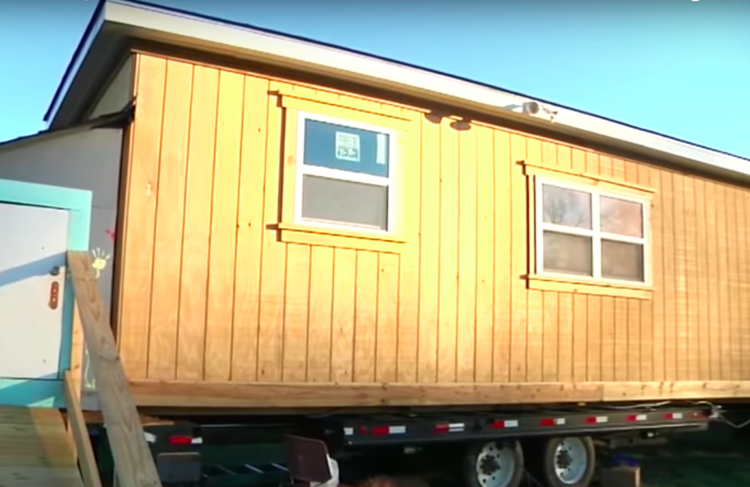 In the spring of 2017, Eddie and Cindy were told that they were invited to the Georgia Tiny House Festival, but they just thought they were going to be looking at some of the houses on the display. Little did they know they were about to receive the biggest surprise of their life.

When they were presented with the home, they were quickly brought to tears. Wouldn’t you be?

“I don’t have the words to tell you what we feel,” said an emotional Eddie.

With such a successful project, the school hopes to get a group of students together to create a tiny house each year to a homeless couple or person in need.

“It was a very moving experience, because the kids got to meet the veteran who will live in the home with his wife. They helped make this couple’s home. Their vision came to life,” Assistant Principal Laura Walley told Rome News-Tribune.

“Never underestimate the power of an idea. By exploring their ideas, they have changed someone’s life forever,” she added.

To check out Eddie and Cindy’s reaction to their new tiny home, check out the video below!

How sweet was it for theses students to build this nearly homeless couple a new tiny home to live in comfortably? Do you think more schools should implement projects like this one?