Can you remember Kelly Clarkson before she was Kelly Clarkson? Well, she was still technically Kelly Clarkson back in 2002, but back then she wasn’t a famous singer and actually, no one really knew who she was. It was that year when she auditioned for American Idol in front of the original crew: Simon Cowell, Randy Jackson, and Paula Abdul.

The thing is, although she won the show and eventually went on to be a star, the network never fully aired her whole audition. With so many auditions, there was never time in the hour-long episodes to air every single person to got signed off to go to Hollywood. Typically, they’d err towards just the really, really bad people or the really, really good people.

In our opinion, Kelly was really, really good, though. And the judges agreed, since she got three yes-es after singing two beautiful renditions of At Last and Express Yourself.

Paula immediately said, “Good job,” and then Randy said, “I love that song—I worked on that song with Madonna; you did a very good job.” Simon and Paula rolled their eyes at the “subtle” bragging from Randy, as Randy went on to half-joke “I can’t help it that I’m so famous!”Kelly’s adorable, quirky personality showed in this moment when she told Randy that he should be a star, telling him to go try out and then took his place as the “judge.” 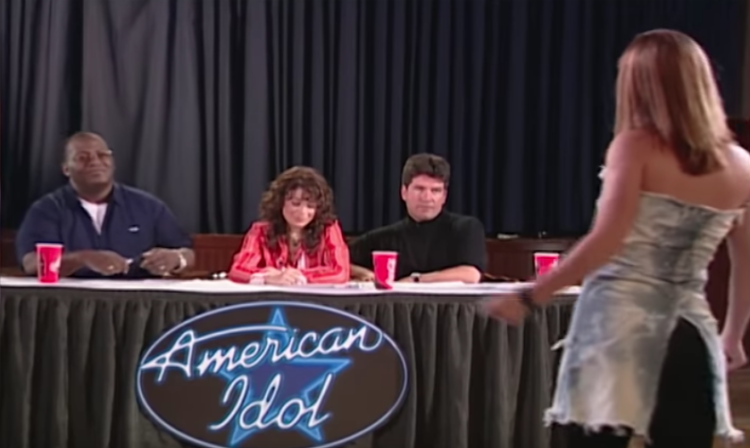 Randy then fake auditioned himself and did a pretty bad job of singing “I believe I can fly.” Simon told Randy that he wouldn’t send him to Hollywood in a “trillion billion years.” Randy then mimicked all the people who fly out of the audition room, pretending he was going to Hollywood (after Kelly told him she’d sign him, of course).

Though she was playing along, I’m sure Kelly was secretly dying inside to hear what the judges were going to say for her actual audition (though if they were this comical, we can see in retrospect how she definitely had nothing to worry about!).

All right, back to business: Randy started the yes-es for Kelly. Paula followed suit, and Simon said yes as well, under one condition: that Kelly go tell Ryan Seacrest that he needs to redo his highlights (ha—now there’s some early 2000s fashion for ya.)

The 20-year-old Kelly Clarkson was pretty adorable in how she responded—and alas, more early 2000s jargon: “Score!” Oh and let’s not even talk about her DIY jeans-made-into-a-shirt ensemble (such a fashion statement!).

Immediately after Kelly left the room, she went and told Ryan to fix his highlights as she promised, and then said to the cameras: “I’m going to Hollywood. I’m going to be there!” Oh yes you are, and yes you were, Kelly! What a cute memory to look back on, knowing what an amazing, famous singer she is today.

Check out this rarely-before-seen original, full audition from Kelly Clarkson before anyone knew her:

How cute is Kelly in this scene? Do you think she should’ve made it through? Do you remember watching her back in 2002? Can you believe it’s been 16 years since she tried out for American Idol?