Over the past year, we’ve taken you on a journey that’s a bit of a departure from our usual delicious recipes, Royal Family news, and general warm and fuzzies to bring you a big story that just seems to get bigger as the months go by. What we’re talking about is the dangerous effects of vaping, particularly Juuling.

Now, if you’ve never heard of vaping powerhouse, Juul, chances are you: a) are not an ex-smoker, b) not someone who vapes, and c) are not a teenager, because those categories are exactly who the company markets to. Of course, it wouldn’t be a big problem if Juul marketed to the first two–the ex-smokers and vape enthusiasts–but it’s the last category, the teens, that has gotten them in real trouble.

That said, it should be noted that Juul has never outright produced commercials, showing teenagers using its products, but the vaping company has retailed an array of flavors that, health officials say, attract too-young users. Among these flavors are sugary-sweet dessert tastes, like mango and creme.

So, what’s the big deal about Juul specifically? After all, plenty of other vape manufacturers retail similarly-sweet concoctions. The problems really started when, according to The New York Times, the San Francisco-based company snagged roughly 75% of the market share of vapes.

The good folks at the FDA had a hunch that the Juul device was gaining so much popularity because of its sugary flavors and the fact that it’s small and resembles a thumb drive, making it very easy to conceal for those that shouldn’t be using it–i.e. teens. The agency also felt that the sweet flavors made it so that younger users might not know that the devices contain dangerous nicotine.

As mentioned, this backlash has been going on for some time now and, finally, Juul has taken action. The company recently announced that it would be suspending the flavors that are most popular with teens and would even be deleting the imagery from its social media accounts, platforms to which underaged Juul users formerly gravitated. 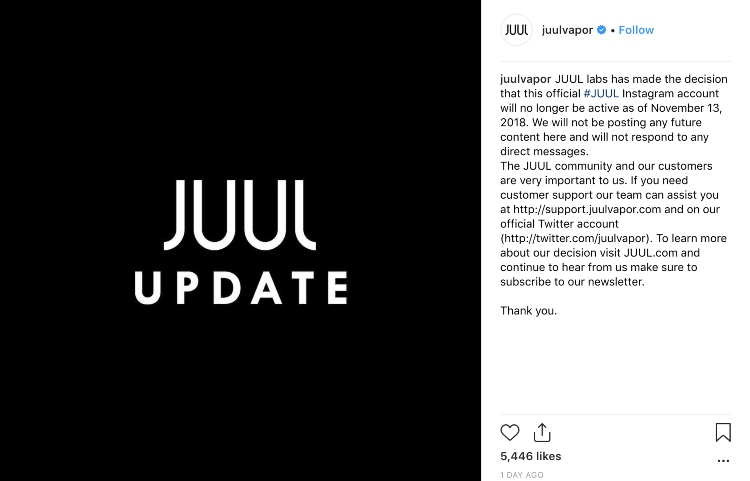 It’s a big win for the public health officials in this country who are immensely concerned that they have yet another smoking crisis on their hands. Good to hear changes are being made!

What are your thoughts on Juul yanking its popular flavors? Are you surprised that the company has done this? Do you know any teens who vape?