Why July is the Most Dangerous Month to Go Swimming

It’s July, and you know what that means? Spending all the days outside, cookouts galore, and of course, going swimming. Right? Well…

It turns out, the month of July is actually the most dangerous month out of the year to go swimming in rivers, lakes, and oceans, even though ironically, it’s the time that you want to do it most.

The Centers for Disease Control and Prevention (CDC) has recently sent out a report on the matter, outlining the vast amount of on disease outbreaks that have been linked to swimming in those areas.

From 2000 to 2014, there were a total of 140 disease outbreaks from swimming in various “untreated recreational waters”—so beaches, public parks, etc.—which led to approximately 4,958 illnesses, plus two fatalities.

The main cause for concern here is, you guessed it, 60 percent of the outbreaks happened in July, with the majority striking between the months of June and August.

The diseases were mostly gastrointestinal, ranging from norovirus to Shigella and E. coli, which makes sense. These illnesses usually occur if people accidentally consume water that’s been contaminated by fecal matter. While humans (likely babies in this case) can be the cause of fecal matter in a body of water, there are other things that cause this such as wastewater and sewage overflow or flooding, sewage treatment plant discharges, septic systems, boating waste, and animal waste near the beach. Gross. 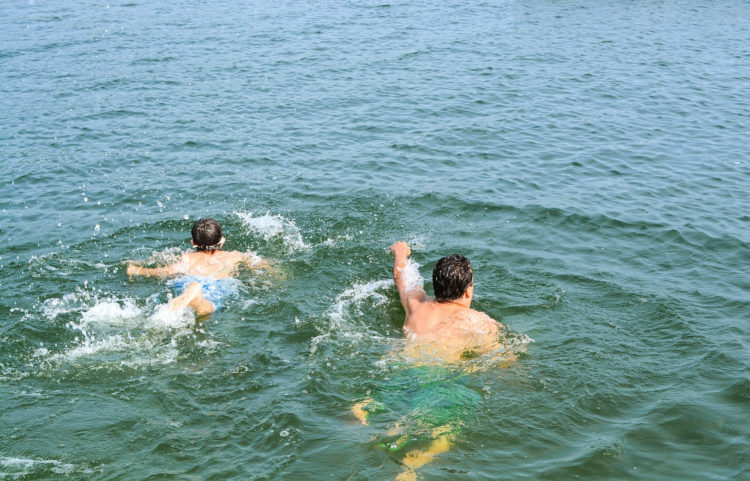 Other outbreaks were caused by bird-transmitted parasites typically present in recreational waters, toxins and chemicals, or harmful algal blooms. The two deaths were caused by a rare disease called Naegleria fowleri, which is often referred to as the “brain-eating amoeba.” It’s not too common, but pretty scary; Naegleria fowleri is a type of freshwater ameba that enters through the nose and destroys brain tissue.

While going for a dip in July isn’t necessarily going to cause you to get a brain-eating amoeba, it’s always good to take caution. For example, don’t go swimming in water that’s “discolored, smelly, foamy or scummy,” the CDC report notes.

It’s also important to steer clear of swimming after high rains or floods, and always use caution in areas that are particularly shallow, not well circulating, overly crowded, not near any toilets. Also, keep an eye out for children with “no or limited toileting skills,” the report says—AKA, if you’re swimming around those who might poop in the pool, get the heck outta there ASAP.

Other ways to practice caution is to avoid swimming around people who might be sick (or avoid going in the water if you are). Additionally, try at all costs to not swallow water while swimming, as people tend to get sick mostly when ingesting the water.

Remember that this report is referring to recreational waters. While we wouldn’t consider pools the cleanest thing in the world, chlorine-treated swimming pools are generally safer in terms of acquiring an illness.

What do you think of this report? Are you going to take more caution when swimming in recreational waters in July—or any summer month for that matter?