We’re feeling a heck of a lot emotions about John Stamos’ recent wedding. In case you don’t know, our beloved hunk Uncle Jesse is officially off the market—again.

I mean, we totally thought his divorce with Rebecca Romijn back in 2005 or that his fake TV marriage to Aunt Becky meant that we had a chance, but alas, we can stop dreaming now. He’s, once again, a married man. And let’s not forget his TV wedding to Aunt Becky on Full House—we wonder how many ladies shed some tears that day.

We’re just kidding, we’re happy for our man Stamos! Plus, we already knew his now wife, model and actress Caitlin McHugh, is pregnant with their first child, anyway. The two got engaged on October 23, 2017 in Disneyland, and are expecting the birth of their baby by this spring.

They’re a pretty cute couple, even we have to admit—and now an even cuter husband and wife. Their wedding ceremony was held on February 3 at the Little Brown Church in Studio City, California with about 50 of their closest friends and family in attendance.

We hear Stamos looked dapper in his black tux (and light blue tinted sunglasses because why not?) and McHugh radiated in a strapless white ball gown, diamond earrings, and a sparkly diamond clip in her hair. We can’t wait to see pictures!

After the ceremony, the two jetted off to the ceremony in a Rolls Royce and rode around a bit to spend a few newlywed moments together before the reception, which was held by the pool in the backyard of Stamos’ home in Beverly Hills. 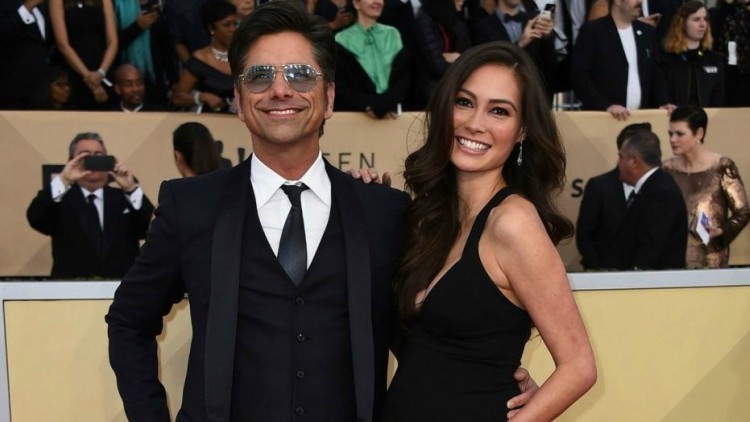 A grand piano and a drum set was sitting next to the pool for a live band performance when guests and the bride and groom arrived, and white rose petals were floating in the water. Guests danced, ate delicious apps, and happily-ever-aftered to their heart’s content.

It sounds like the most romantic day ever. And it was. But of course, what’s a wedding if something doesn’t go wrong?

The wedding started off with a scare

For Stamos and his bride, nothing crazy happened on the actual day of their nuptials—it’s what happened the night before that’s slightly (okay, a lot) terrifying.

Apparently someone snuck into McHugh’s hotel room in Beverly Hills while she was presumably running last-minute wedding errands, and stole an estimated $165,000 worth of jewelry. Holy moly!

And we say snuck in, we’re being serious. Police couldn’t find any evidence of a forced entry, so it’s still unclear as to how the robber actually got in to the room.

The stolen jewelry was on loan from Neil Lane Jewelry, and was what McHugh was planning to wear for her big day.

As of now, the case remains to be investigated. Hopefully they find the thief, because that really isn’t cool. But hey, at least the two were able to put it aside for smiles on their big day. We’re just glad it was nothing that actually derailed the wedding!

Want to know even more? Check out the video below for even more info on the wedding and the burglary!