They say your second or third pregnancy is usually easier than the first, but that’s seems to be the least true statement for pregnant singer and actress Jessica Simpson.

The mom of two—Maxwell, 6, and Ace, 5—has been struggling through her third pregnancy tremendously. In fact, it seems like it’s probably her hardest of all.

The 38-year-old has documented everything she’s gone through on her Instagram. First, her foot swelled up like a balloon. After trying everything she could think of, her foot was still so large that she had to ask her fans for remedies on what to do.

Then it was her acid reflux. Jessica experienced it so badly that she had to purchase her own sleep recliner to sleep in since sleeping in a bed would aggravated it. (And guys, sleeping in a recliner when you’re that pregnant is not a walk in the park either!)

That’s not all. Additionally, the poor woman came down with bronchitis for three whole weeks; experienced sciatica, which sends shooting nerve pain down your leg; and has had to deal with intense insomnia.

And she isn’t getting cut a break just yet. Just when we thought it couldn’t get worse for her, it did. She recently posted another photo to her Instagram page of her holding a toilet seat.

“Warning…Don’t lean back on the toilet while pregnant,” she captioned the photo of herself holding up the toilet seat.

That’s right—girlfriend broke a toilet seat just trying to live her pregnant life! At least she can laugh at herself, right? Good thing the majority of other people who saw the post laughed right along with her—and were totally sympathetic, understanding her pain. 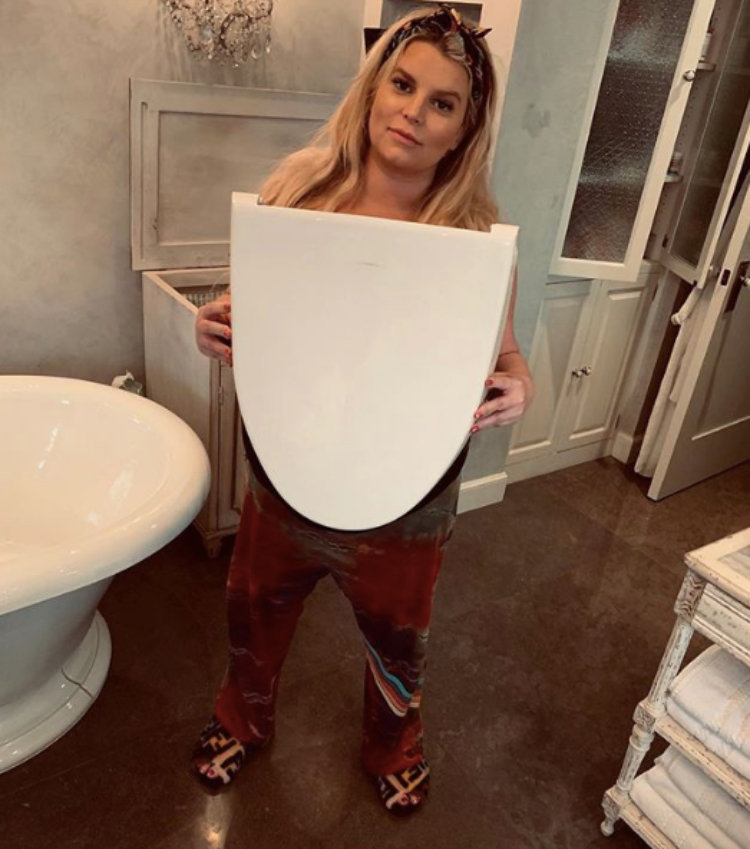 “It happens,” someone wrote. “Those lids and seats are not made for long term wear and tear.”

“You are my favorite human,” said another.

Some people tried to tell her it wasn’t even her fault: “I blame the manufacturers for cutting costs for cheap materials and poor design,” they wrote. “There are wobbly toilet seats everywhere these days.”

The good news is, it does seem like this pregnancy is still a pretty special one.

“Jessica is doing great, she’s really enjoying her pregnancy,” a source told Hollywood Life. “She didn’t really plan or expect to be pregnant a third time, so it all feels so special. And one of the best parts about it is that she gets to share the excitement with her kids, they’re old enough to understand and are fully invested.”

We just hope she has a smooth delivery after all the issues!

Have you ever experienced any pregnancy symptoms like Jessica has? What other kinds of side effects did you experience?