A Woman Thanked This Girl for Wearing Her Bikini

When you wear your bikini to the beach, the last thing you expect is for someone to thank you for wearing it. That just sounds weird and kind of creepy, doesn’t it? And anyways, wearing a bikini to the beach is normal, right? You just put a bikini on when you’re heading out the door for the beach, no problem. Well, that’s not the case for everyone. Sara Gebert is a young woman who struggles with a gastrointestinal disorder called gastroparesis, and for her, wearing a bikini was not the easiest choice to make.

Gebert has been struggling with gastroparesis for years, and she had ileostomy done a few years ago. An ileostomy is a surgical procedure in which a piece of the ileum is diverted to an artificial opening in the abdominal wall. Basically, to help the small and large intestines function properly, tubes need to be inserted into the abdomen. These tubes are connected to external bags which Gebert has to carry on her at all times.

Needless to say, this is not an easy lifestyle.

While Gebert has gotten used to the tubes and bags (she has a G-tube and a J-tube, as well as an ileostomy) the general public is not used to a young woman’s abdomen looking the way hers does. She writes about this in her moving essay:

“Everyone is exposed on the beach, but I literally have to “let it all hang out.” I have an ileostomy, a G-tube and a J-tube, not something you see every day. I’m used to them — to me they’re normal. But to everyone else, I’m something out of a science fiction movie.”

Gebert claims she can look “normal” with clothes on, but without clothes on, her insecurities become much more clear to surrounding people. And the beach, typically, is not a place where you wear normal clothes. 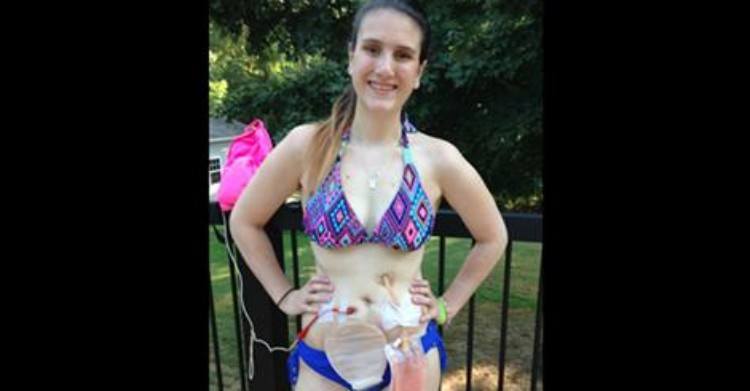 The Mighty
On this beach day, Gebert was on vacation. She had packed all of her bathing suits to try and find one that hid her tubes and bags. But at the last moment, she decided she would just go in her normal, two-piece bikini. And she was terrified.

You can only imagine what this must feel like; sitting on the beach, trying to enjoy your vacation, but feeling like the eyes of the world are on you. How could you not be self-conscious that the people around you are judging and staring? Gebert said she’s had people tell her she’s “gross” or say, “are you really getting in the pool like that?”

So she was obviously nervous when a random woman began to approach her.

Although Gebert was prepared for her to say the worst, the woman only thanked Gebert for wearing her bikini so proudly. The woman told her that she also had a ileostomy once, and that she no longer has a large intestine. And, as Gebert writes, this woman had nothing but praise for this brave girl.

“You thanked me for rocking my bikini, told me about how you used to have an ileostomy as well and how you no longer have a large intestine. You told me I was inspiring. That honestly meant the world to me.”

After that amazing compliment, Gebert’s fears vanished. She felt at ease on the beach and she enjoyed her vacation without fear or self-conscious worry. With one encouraging compliment, this woman made her feel comfortable in her own skin, even when she was in an uncomfortable situation.

What an inspirational story! It just goes to show that a little kindness can go a long way.