You Have to See How This Wife Reacts to Her Husband’s Surprise Makeover!

Rachel Ray is the reigning QUEEN of makeovers—that’s right, we said it! Since her talk show started, the spunky host has been making it her mission to turn ordinary duds into hunky studs. So, to commemorate her impressive spree, we are going to show you one that doesn’t follow the typical formula that we are used to seeing from her.

Normally, Rachel consults the friends and family of the “makeoveree”, then performs the change before doing a dramatic reveal in front of her studio audience. This time, however, the host decides to really mix things up!

But let’s not get ahead of ourselves—let’s first learn about the lucky man who is about to make such a big change in his appearance.

Meet Travis and his wife Connie. He’s just your average brewer from Atlanta, and he’s got quite the Paul Bunyon look going which, as you can guess, his wife hates!

So, instead of shaving the wiry beard off, the dude decided to take a bit of a different approach.

Believe it or not, he actually called Rachel Ray and asked for the makeover himself. The show then decided to send along a camera crew led by top stylist Kyan Douglas to come to his house IN THE MIDDLE OF THE NIGHT to shear off that facial hair. Mind you, this was all done while his wife was fast asleep!

In the clip, the team (very quietly!) gets started on the transformation, but unlike the previous makeovers shown on the show, there is added pressure here—they must finish before Connie wakes up!

They start off with a unanimous agreement that the messy beard has to go, but before they get to shaving, his close-cropped hairstyle gets a modern update. Kyan chooses a fade for Travis’ locks, explaining that this technique will ensure a more “structured,” less bushy look.

Once his hair is all set, the stylists move onto the beard. Now, the team decides that they want to go for a very dramatic change here by not leaving any facial hair—not even a goatee or a ‘stache! But we’ve got to admit that we’re happy that they went for the “baby-faced” look. He looks incredible! 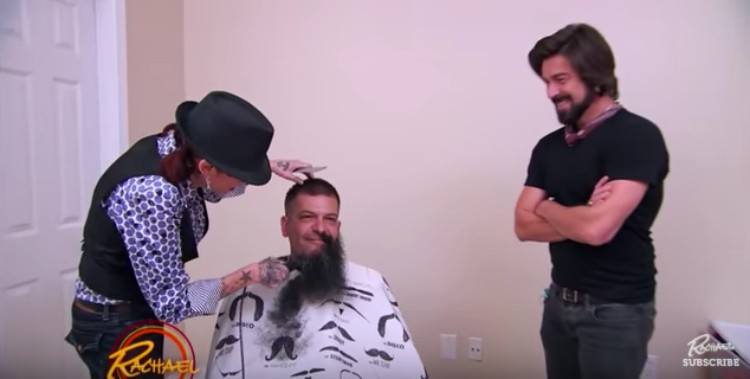 The team completes Travis’ new look by switching up his clothing game. Normally, the brewer seems like a simple, jeans and t-shirt sort of guy, but Kyan decides that he could use a sleeker wardrobe with a slimming “dark on dark” pants and denim shirt combo.

Next, Travis fires off a text message to his wife asking her to come downstairs. Can you guess what happens next?

To see the shocking transformation for yourself, be sure to click on Rachel Ray’s video below. Spoiler alert: His wife Connie can’t get enough of his new look!

What do you think of Travis’ makeover? Have you ever shaved off a long beard like his? If you were his stylist, what would you have done differently during the makeover? Tell us all about your thoughts and experiences in the comments section below!