The True Story of How Laura Bush and George W. Bush Met

It’s been a while since we’ve heard from Former First Lady Laura Bush! After some years out of the spotlight, her husband, George W. has finally started to make appearances again, and her daughter, Jenna Bush Hager, has entered the public eye as a TV journalist, but Laura had remained quite quiet after leaving the White House in 2009—until she recently appeared on TODAY, that is…

The interview, which was conducted by Kathie Lee and none other than Bush’s daughter, Jenna, truly was a one for the books! The three discussed everything from high heels (Laura borrowed a pair of Kathie Lee’s for the appearance) to the First Family’s time in the White House to, even, Valentine’s Day.

As it turns out, the former first lady was in New York City to spend her February 14th with her grandchildren, which meant that she left her real-life Valentine, the Former President of the United States, George W. Bush, at home on his lonesome.

It’s a bit of a sad scenario, but, considering the couple has been together a whopping 40 YEARS, we’re willing to bet that they’ve spent their share of holidays together. 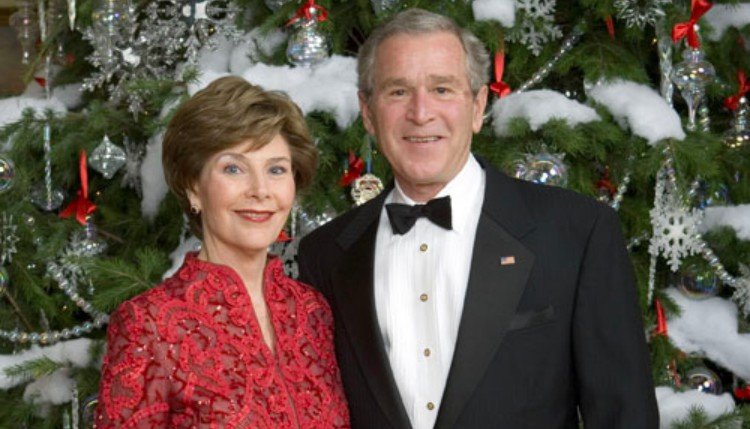 As the interview progressed, a question came up as to how Laura and her husband, George, first met. As it turns out, the two first crossed paths at a friend’s barbecue (how very Texas of them!) and, apparently, hit it off enough to go and play a round of miniature golf the very next day.

“I kind of think it was love at first sight,” Laura admitted.

Though her daughter wasn’t there at the time, Jenna confirms that the two must have shared a strong connection. So, how does she know this, exactly? Well, she used the power of deductive reasoning to determine that, since her parents were married just a short three months after that initial mini golf date, it must have been the real deal.

We definitely think Jenna was onto something here….

George W. and Laura may be retired and closing in on their twilight years, but that doesn’t mean that things have always been so peaceful for the couple. Aside from participating in a particularly tempestuous time in the White House, the two endured some pretty serious challenges in their younger years.

For one, W. struggled with alcoholism for years before entering the White House. Laura contends that she hated that time, but it wasn’t until the former president turned 40 that he decided it was time to quit for good.

In her book “Spoken from the Heart,” Laura writes about the troubling time:

I was not going to leave George and I wasn’t going to let him leave me with twins. Our marriage was enduring, we loved each other and we were two people who did not have divorce in our DNA. But I was disappointed and I let him know that I thought he could be a better man.

Yep, marriage sure is tough, but it doesn’t get much sweeter than that statement, folks! It’s so wonderful to see a couple beat the odds and come out on top. To hear the story from Laura Bush herself and to learn more about what the Former First Lady has been up to these days, be sure to watch TODAY’s clip below!

We’d love to hear your thoughts on all things Laura Bush. Were you surprised by the story of how she and George first met? Are you a fan of Jenna Bush Hager as a journalist? Who is your all-time favorite first lady?