Homeowners Associations often have a lot of rules about what you can and cannot do to the exterior of your home. Often, any changes have to be approved by the HOA, and there are other rules that must be obeyed no matter what.

Over the past year, families in one community decided to fly a number of different flags to support causes that were important to them. For example, they flew Black Lives Matter flags, and they flew Thin Blue Line flags. In order to prevent any controversy, the community’s HOA made a decision to ban every type of flag except for the American flag.

Instead of arguing about it, the homeowners decided to comply with the new rule. They took the flag down, but they also found another way to show their Pride. The homeowner wrote, “Looking through our new rules, we noticed that removable lights are permitted without restriction so… we bought 6 colored flood lights, and we washed our house in pride colors. A little less subtle than our simple flag. A lot more fun for anyone complaining about the flag itself and what it represents.” 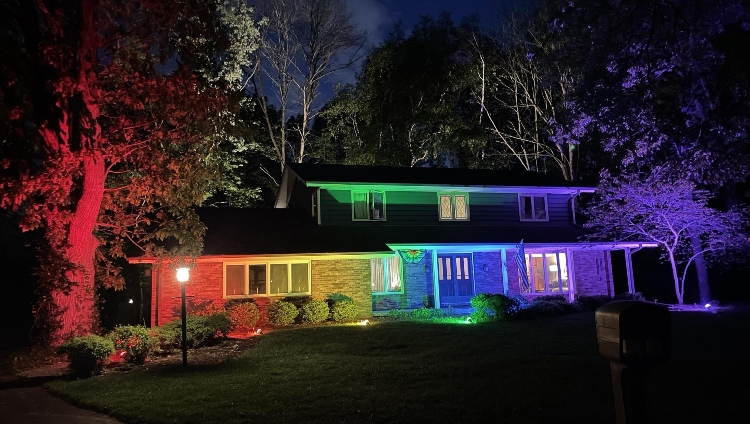 The homeowner also shared a picture of the rainbow colored house, and many Reddit users are loving it. One comment reads, “Woah. The lighting is much better than a simple flag imo.”

Other Reddit users think it’s only a matter of time before the HOA changes the exterior lighting rules. One person wrote, “OP please report back when HOA tries to pass new flood light rules.”

Do you think it’s ridiculous for an HOA to tell you what type of flag you can fly at your home? Do you think it’s only a matter of time before this particular HOA changes the exterior lighting rules? Do you think the rainbow flood lights are more effective than a simple Pride flag? Have you ever lived in a home that was part of an HOA?