The Dirty Secret That Hotels May Be Keeping From You

Staying in a hotel should be a luxurious and relaxing experience, but, let’s face it, sometimes that is just not the case. From noisy neighbors to lumpy beds, some hotels just aren’t up to snuff. Nonetheless, most guests don’t consider the idea that they may end up getting sick from simply staying in a room. Warning: This story may make you re-think taking your next vacation!

News station WAGA in Atlanta released an exhaustive report about the cleanliness—or lack thereof—of three popular hotel chains. Now, this issue isn’t regarding dirty sheets or stained carpet. It’s something that most of us just wouldn’t second guess: drinking glasses.

Randy Searles, the former manager of an Embassy Suites in Alpharetta, Georgia, goes over the highly questionable cleaning procedure in his interview with the I-Team. “Basically what they’re doing there is using glass can cleaner to spray into the glasses, wipe them out, and put them back.” GLASS CAN CLEANER?! That cannot be healthy!

Searles goes on to explain that this cleaning routine was in place for the full six years that he had worked at the hotel. In other words, theoretically speaking, the exact same glass could have never been properly sanitized for an entire six years.

When reporters checked into the hotel and set up hidden cameras, they in fact did catch a maid using the glass can cleaner on the cups, just as the former manager had described. The liquid cleaner even had a warning on the side of the can reading “DO NOT DRINK.” Unbelievable!

Sam Strouth
The news team checked into two other area hotels—a Holiday Inn and a Sheraton Suites—and ended up catching similar practices on hidden camera. The maid at the Sheraton Suites didn’t even bother to change the gloves that she had used to clean the toilet before she handled the drinking glasses! 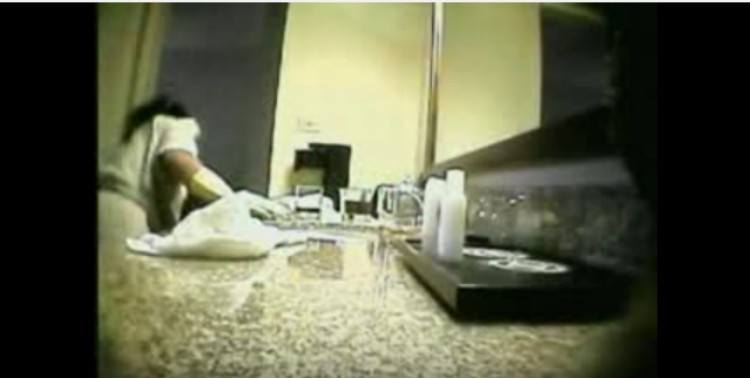 Sam Strouth
So, just how dangerous can this practice end up being for the poor guest who unwittingly drinks out of one of the glasses? Well, the answer is not what we’d call pleasant.

Disease control expert Roy Costa explains that when glasses are not properly sanitized, users end up being exposed to some pretty nasty stuff. Costa says, “You can get any of the pathogens that were on that person’s hand when they touched the cup, which could be things like e. coli and salmonella, your mononucleosis, you have your herpes . . .”

Sam Strouth
Enough said! Let’s just say that I’d wager that all of you readers out there are never going to touch one of these glasses again. Fortunately, there’s good news for all of you. After the report initially aired, hotel giant Holiday Inn replaced their reusable glasses with single-use plastic wrapped ones. It’s good to know that someone made some changes for the better.

Watch WAGA’s video below to see the complete report for yourself.

What do you think about these hotels’ poor sanitation practices? Have you ever gotten sick from staying at a hotel? Tell us all about your thoughts and experiences in the comments section below!