Horse Pretends To Be Dead Whenever People Want To Ride Him

You might be aware that possums play dead when they feel threatened or scared. But did you know sometimes horses play dead too?

Okay, so we can’t speak for all horses, but there’s a horse in Durango City, Colorado, named Jingang who likes to play dead. And he doesn’t do it when he’s scared—he does it to avoid people riding him.

Not only does Jingang fake his own death, but when he does it, he falls to the ground in the most dramatic of ways. When someone attempts to ride him, he completely avoids it by lowering his body to the ground melodramatically and laying there with his eyes closed until the rider gives up.

In fact, the only real clue that you can tell he’s faking it is that he leaves just his nostrils flaring. But nothing breaks his character—nope, not even all the tasty carrots or sugar cubes offered to him. He’ll only stand up again once the rider walks away. What a way to avoid doing your job!

Francisco Salazar, a horse trainer from Durango City, posted a video displaying Jingang playing dead on numerous occasions that has since went viral. The video was so popular it received 82,000 likes and was shared more than 630,000 times. 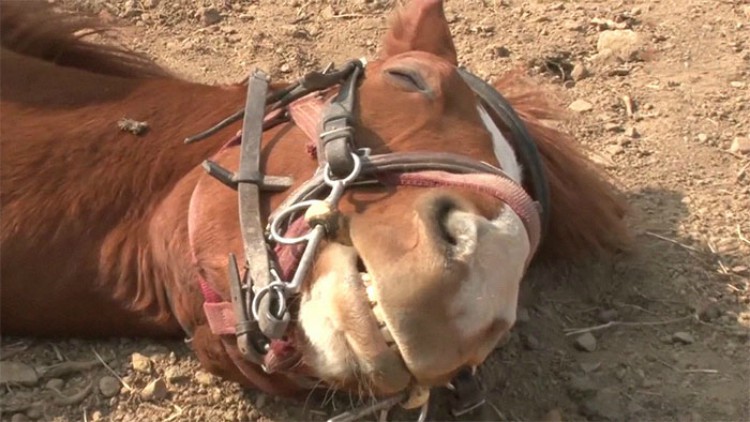 “This is literally me, pretending to be asleep when my mom shouts from downstairs to wash the dishes,” one person wrote.

“I did not know horses could be drama queens!” someone else commented.

“That horse is a genius, wish I could just do that every time someone I don’t like comes near me,” another person wrote.

Though people are finding the horse continuously “dying” amusing, Salazaar refers to it as “cute but naughty”—aka, it’s all fun and games, but business is lost when Jingang refuses to do his job!

Additionally, some people noted the reasons that Jingang was playing dead: perhaps he was trained to do it or that he may even have a neurologic disorder that causes him to pass out with compression from the rider.

While the exact reason for Jingang’s antics is unclear, but one thing’s for sure: It doesn’t seem like he’s quitting any time soon—or allowing anyone to ride him!

Watch the video of Jingang continuously falling to the ground below—and try to stifle your giggles.

This lazy ass horse plays dead whenever his owner try to ride him.. *my spirit animal* 🐎 . #kritterklub #loves #horse #animal . ✨Full ver. ▶️ bit.ly/2mZbwRZ . ✨Follow the link in bio for more videos in English and 14 lang

What do you think is going on with this horse or why he continues to play dead? Do you think he was trained to do this, or figured it out on his own? Have you ever seen an animal play dead before?