Before we dive into this latest story about a high school senior, I want you to picture yourself back in high school. Picture the sea of lockers, the smell of curly fries in the cafeteria during lunch, and roaming the hallways after fifth-period English. These are all typical scenarios in the day of the life of a typical high school student.

Teens also endure lots of many embarrassing moments in their high school careers. Anyone who says they entered adulthood free of awkward stories along the way is probably lying. High school is full of wishing you could crawl under a hole and never get out, amirite?

That’s how Ebony Smith felt after a huge editing fail on a photo of herself (and her hair style) appeared on her high school website following homecoming.

Let’s backtrack for a second: Ebony Smith is a senior attending North Shore Senior High School in Harris County, Texas. She was recently crowned homecoming queen in September, which is a pretty big honor for high schoolers.

Life would’ve been good for the teen if it had just stopped there—but she was mortified when a poorly photoshopped picture of the big moment appeared on the Galena Park Independent School District website.

You see, Ebony dies her hair purple. However, this violates her school’s dress code, which states that students are to “avoid inappropriate hair color,” and does, in fact, list purple as example of this.

Because of this violation, Ebony’s violet locks were altered to make them a more “natural” color: Brown. 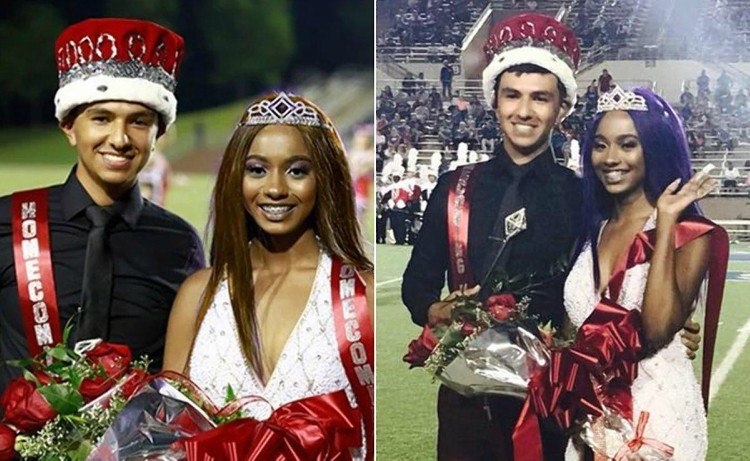 While the handbook does indeed state that purple hair isn’t allowed, does it necessarily make it okay to change her hair color without her permission? Especially when Ebony’s fellow classmates were the ones to vote on homecoming queen, knowing full and well what color her hair was?

Ebony’s mother, Tameasha Watkins, thinks not and came in hot to defend her daughter’s hair choice. “You changed her to make her look like someone else,” Watkins said. “Keep her as who she is. That’s who the students voted in.”

After all of the complaints, the school said they regret their mistake, and apologized in a statement for the Photoshop mess.

“The error was immediately corrected, and our district sincerely apologizes to the student affected and her parents,” the school had said in a statement. “Our intent has been, and will continue to be, to acknowledge and spotlight the accomplishments of our students, and we do regret this mistake.”

To fix the problem, the school simply republished the photo in black and white to avoid hair color altogether.

We think that’s a decent compromise—what do you think? Should they have just published the photo as it appears in real life? We’d love to hear your take on their solution.

Watch the video below for more info on how the high school handled this situation (like how they said they weren’t responsible for the photo, but it was credited to a district employee!).