Suffering the loss of a loved one through tragedy is a painful experience. As painful as it is to lose someone in death, physical separation is another form of loss that causes heartache.

Those feelings never quite leave. Many grieve in some form for the rest of their lives, but still find comfort with those who are still with them. But what happens when you’re in a position to make up for the separation – in a way that you never imagined?

Eliahu Pietruszka was able to connect with a family member he never knew existed. How? His tragic story happened during the Holocaust, when he lost most of his family. In 1939, Eliahu escaped Nazi-occupied Warsaw, leaving his parents and 15-year-old twin brothers behind. He fled to the Soviet Union.

One of the brothers – Volf – was also able to escape, but sadly the rest of the family was killed. For a little while, Eliahu and Volf were able to keep in contact before Volf was sent off to a work camp in Siberia by the Russians. Since he never heard from his brother, Eliahu thought his brother had died.

In his mind, there was no one left. But that wasn’t the case. Volk settled in the Russian city of Magnitogorsk and many years later passed away in 2011. And that wasn’t all: he started his own family and had one son! That son was still alive, living in that same town. Eliahu had no idea that he existed.

By 1949, Eliahu married and migrated to Israel to start a new life. Then news came in early November of this year that would change his life. Eliahu’s grandson received an email from a cousin that she had discovered a memorial tribute written by Volk. He’d left a Yad Vashem testimony about Eliahu, the brother he thought he lost all those years ago.

Both brothers thought the other was gone. Eliahu’s grandson dug deeper and was able to find a phone number for Volk’s son, Alexandre Pietruszka. He didn’t know he had a living uncle, and Eliahu never knew he had a nephew. At 102 years old, he would be able to meet him for the first time. 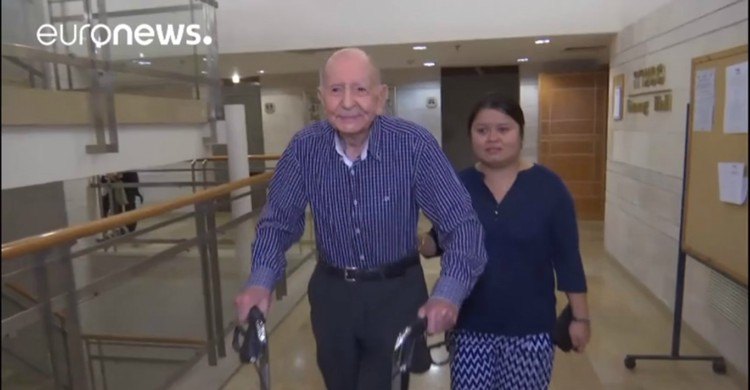 Alexandre traveled from Russia to Israel to meet his long-lost uncle. Watch this video to see the emotional meeting between the two and to hear what Eliahu has to say about seeing part of his family. So much sorrow, yet so much joy, is to be seen in their embrace.

The number of Holocaust survivors is dwindling, and others like Eliahu have either lost all or most of their family members. Due to the Yad Vashem project, these two were able to connect with each other, but neither ever expected nor believed anything like this could happen.

You never know what a little family research will uncover with the help of technology. For these two, it rewrote their family history.

Are tears streaming down your face because of this meeting? What do you think of this family’s story? Has your family experienced something similar?