Are malls one of your favorite places to be around at Christmas time? Visions of heavy crowds, slow-moving shoppers, and busy food courts probably dance through your head.

But there are bright spots to be found when mall shopping during the holidays. There’s Santa, bargains, and free samples. And as you’re about to see in this video, there are revelers looking to brighten up someone’s day.

If you’ve spent any time in a mall food court then you know it serves two main purposes. One is for grabbing a quick bite. The other is for kicking up your feet so you (and the kids) can take a break from all that Christmas shopping. Your mind and feet need a rest.

Shoppers in the food court at Ontario’s Seaway Mall near Niagara Falls were in for a treat as they munched on their food. In this video, you’ll notice the large crowd is oblivious to the music and murmurs around them. That is until a young woman on a cell phone stands up and opens her mouth.

Out spills operatic notes singing the “Hallelujah Chorus” from Handel’s Messiah, catching everyone by surprise. Some people look confused. Others are curious. At first, she is standing alone. Slowly, one by one, then by the twos and threes, others chime in. These singers were disguised as regular customers. It’s a Christmas flash mob! 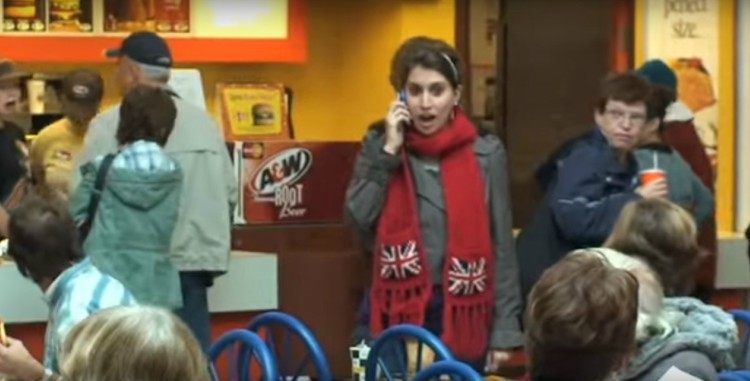 With nearly one hundred voices joined together, their harmony fills the entire section of the mall with the song. Customers and bystanders whip out their cameras to capture the moment.

It was later learned that these professionals are part of Chorus Niagara, and were hired by an outside company to spread some holiday cheer. It looks like it worked! Singers rehearsed for months to get their routine down.

With help from the president of the mall, the group was able to stealthily set up and rehearse on the day of their performance. The reaction from the crowd was worth it. Since its upload, the video has been viewed on YouTube over 50,000,000 times.

Days after the video went viral, the young lady on the cell who started the whole thing was interviewed by a local paper, the Welland Tribune. She spoke about the various responses from people, including a family seated near her:

“They had these two little kids with big eyes and one of them said, ‘mom, this is so cool’. I just loved it. I loved that we really seemed to lift people’s spirits like that.”

Click below to hear the full performance and to see the priceless reactions from people in the food court. It’s not the type of song you’d expect to hear while in Christmas shopping mode, but it looks like it was a welcome distraction for the day. And if you know the words, feel free to sing along too!

What are your thoughts on this flash mob’s holiday surprise? Have you ever witnessed a flash mob or been a part of one? Do you know this song?