The Crazy Historical Reason Most Dresses Don’t Have Pockets

It’s funny to think that it is entirely possible to take the construction of a garment for granted. Have you ever bought a pair of pants only to learn later that they have false pockets? What about a jacket you wished had a hood for the rain?

It turns out that pockets are kind of a big deal. They were – and are still today – a point of discussion when it comes to tailoring women’s clothing. That’s because historically, women did not have pockets sewn into their clothes.

There are some sexist connotations to that practice, of which we will dive a bit into its background. Up until the late 17th century, ladies carried their wares exclusively in bags or on chatelaines, an accessory that attached to the outside of their dresses and would hold keys, mirrors, perfume bottles, coins, and the like.

Not a pocket was available for women until around 1690 or so, when they would be tied around their waists in the inner petticoat of a dress. Openings were stitched into the petticoat so that a woman could reach the pockets, but only after maneuvering under her gown and past the first petticoat.

Located in an intimate space accessible to her, these small pocket sacks finally provided a haven for her secret or tiny possessions. She couldn’t carry much, but it was somewhat private. In the meantime, men’s pockets were sewn directly into their garments and have stayed that way ever since.

Still, handbags were to become the norm in all their openly visible glory. By the 1800s, dress styles changed, and large puffy, petticoat gowns had given way to slimmer silhouettes. Out went the pockets that distracted from the newer designs and in came a surge of clutches and purses.

Pockets simply didn’t look pretty on a lady’s form, and with their absence also went the freedom of her carrying her own things. Got that? No pockets meant little or no independence – in the name of someone’s beauty standards.

A tidbit: smaller purses were a status symbol indicating that a wealthier woman left money affairs to her man at home and didn’t carry any. A working woman carrying a larger purse showed that she had much more in her bag, most likely job-related materials.

But by the 1890s, women wanted more change and a huge turning point was with the establishment of the Rational Dress Society. Instead of corsets, they wanted comfort. Demand for pants also increased – pants with pockets! 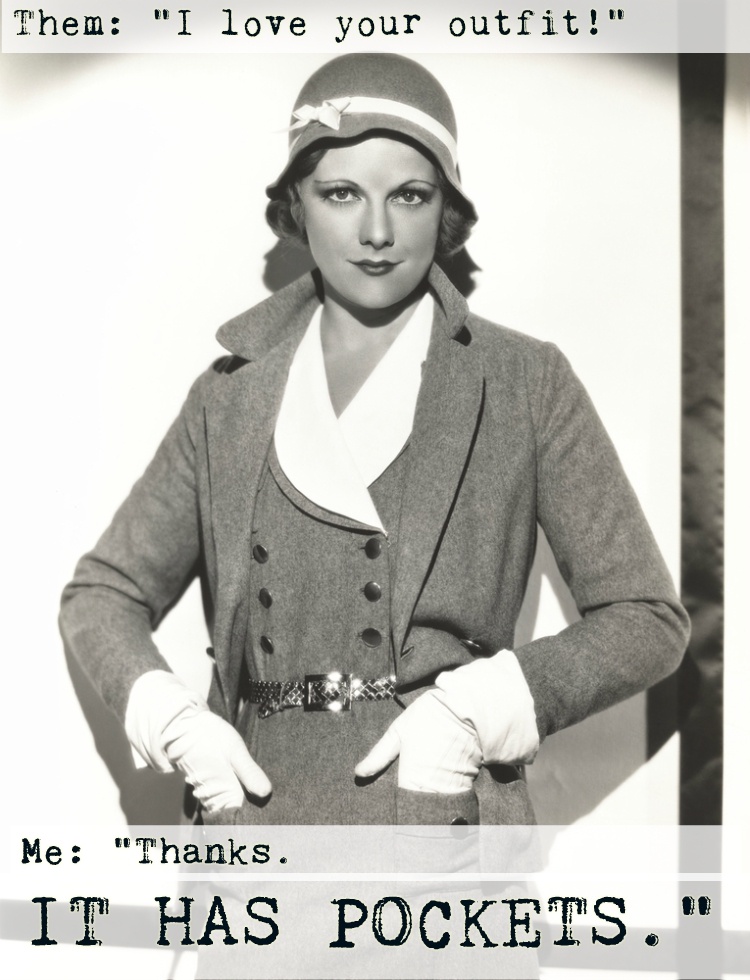 Fast forward to the 1930s during wartime and women’s clothing included baggy pants too. They were working in factories and other places, but still, regular pants and those with pockets weirded some people out. Would there be a day when it’d become acceptable?

Over the last few decades we’ve seen women’s fashion shift back and forth over pocket inclusion and designs. And for some reason, it’s exciting to see formal gowns with pockets. But one thing people have noticed is that ladies’ pockets are considerably smaller. That means we can’t tuck away as much as want to.

Hmm. That means we still need handbags to carry our stuff most of the time – money, perfume, mirrors, keys, and phone – kind of like back in the day. The more clothing styles evolve (hello, skinny jeans), the more women may have to learn to do without pocket space.

Did you know that pockets had such a history? What are your thoughts on clothing styles that eliminate them, trim them, or give you faux pockets?