How a Pantry Staple Can Clear Up Stubborn Congestion

Though springtime has plenty of wonderful merits, it also carries with it quite the curse—allergies. Having a perpetually stuffy or runny nose for a couple months out of the year is, unfortunately, the reality of many. If you’re a sufferer, then you know exactly what I’m talking about!

While medicines—prescription or otherwise—can do a good job of breaking up that mucus, we can all agree that it’s not a great idea to load up on pills and syrups, especially if you rely on them regularly to get through the day.

That’s why we are going to take a look at a remedy that seems to be on everyone’s lips these days: Himalayan salt inhalers. Somehow, these odd contraptions have ended up landing in the purses and pockets of sufferers everywhere, but for good reason. They seem to be making a real difference in the lives of those who are afflicted with sinus and breathing issues.

In the late 1800s, European doctors began ordering salt cave therapy for patients who were experiencing lung or sinus problems. This practice apparently started when experts realized that salt miners had less sinus issues than the rest of the population.

Because we can’t all spend a few hours at a time, sucking in the fumes from a faraway salt mine, specialists found a better way to mimic the effects. By creating a handy salt inhaler, patients have been able to reap these same special benefits.

Salt is a bit of a natural cure-all; it has antibacterial and anti-inflammatory properties, it can remove airborne pollen, and, best of all, it quickly and safely loosens excessive mucus. 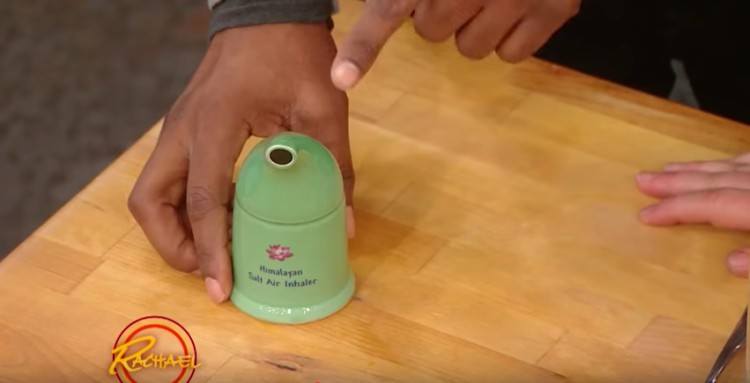 The fuss behind “Himalayan” salt products

Though plenty of people think that this pink salt is nothing but a scam, there are others that will tell you that its virtues outweigh its high price.

The idea behind using Himalayan salt, specifically, is the fact that it is said to be the most mineral-rich variety on earth. Also, when in its authentic form, the salt is never, ever processed.

How it can help

The Himalayan salt inhaler can be used to ease the symptoms of everything from a common cold to seasonal allergies to even COPD.

The inhaler itself may look exotic, but, believe it or not, this handy guy can be found at most online retailers. You may even be able to snag one at your local big box store. Who knew?!

If you’re not into holistic medicine, this may just sound like mumbo jumbo, but it’s important to see how the inhaler works before you discount it. To witness this magical remedy in action for yourself, be sure to click on the Rachael Ray Show’s video below. As a bonus, you will also be let in on several other salt-based breathing therapies you can do right at home!

What do you think about the Himalayan salt inhaler? Have you used one of these yourself? Do you swear by any other holistic remedies for the sinuses? Tell us all about your thoughts and experiences in the comments section below!