We love cats for two reasons: 1) they are oh-so-cuddly and 2) they seem to be more intelligent than us. Now, we’ll admit that we are not ALWAYS happy when our beloved felines use their smarts to outwit us simple-minded humans. Their talents, especially when it comes to hiding in plain sight, always leave us gobsmacked.

Take the tabby in the above picture, for instance. We know, you are probably saying “What tabby?” At first, we didn’t believe that there was actually a cat in the image either, but we promise that there most definitely is a furtive feline hiding in plain sight.

When we got our first glimpse of the mind-boggling image, our eyes darted in a million different directions. We must have looked at every single inch of the photo.

When we couldn’t pin down that kitty, we expanded our search efforts by doing a little bit of cheating, zooming in on the areas where we thought our sneaky subject might have been hiding. Hey, we’re not beyond taking advantage of modern technology if it helps us in our efforts!

At first, we were convinced that the black portion above the top rung of the fence was the sweet spot. We couldn’t spot glowing eyes or a tail, but we thought that there was a good chance the cat had just rolled herself into a little ball.

But, once we got a closer look at the mysterious dark blob, we realized that our eyes were just playing tricks on us. No cat there! 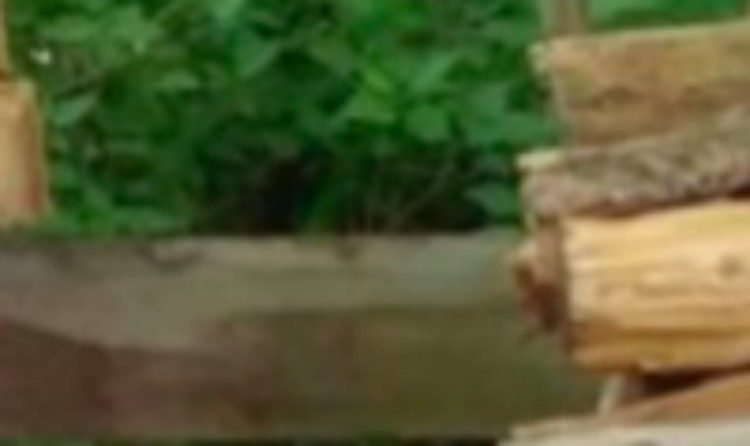 Next, we moved to the grayish portion in the woodpile on the right. Was there a Siamese cat splayed out, blending into the lumber? We weren’t completely convinced, but we thought it was definitely worth looking into.

Sadly, we were wrong again. Just where was this mysterious feline hiding? To tell you the truth, we weren’t convinced that there was one hiding in the first place! Was this just one of those evil “visual puzzles” that really has no payoff? We’ve seen them floating around the internet before, and we didn’t want to play victim to another hoax!

Just as we were about to call it day and close the window, we had a massive breakthrough. In our prior search, we had neglected to give one portion of the image the time that it deserved.

You see, in our experience, darker-colored kitties are usually harder to spot, so we were only searching for a black cat. Once we considered other colors, we were FINALLY able to solve the riddle.

Because you’ve surely strained those peepers in an attempt to find that kitty, we’ll give you a break in the form of an exceptionally cute clip with—you guessed it—cats hiding in funny places. As a bonus, you will finally get the answer to where the infamous cat is hiding. Talk about a great reward!

We’d love to hear what you have to say about this visual puzzle. Did you find the hiding kitty? If so, how long did it take you? Where does your cat like to hide?