As we head into the cooler, fall season, there’s something of people’s minds (besides pumpkin spice lattes, that is)—and it’s trying to avoid getting sick. The season change and temperature drop are both culprits to people coming down with a cold or flu.

We’re especially talking about the little ones, or kids who might not have the best sense of when to wash their hands, one of the biggest ways disease spreads. When children come down with something, they have to miss school, and too much missed school and result in falling behind and not being able to keep up. And no parent (or child) wants that.

Up until just recently, hand washing was the best method to preventing the spread of getting sick, and therefore keeping sick days a thing in the past. However, a new study published in the journal Pediatrics says there’s a better method: Using hand sanitizer.

The study looked at over 900 children three years old and under who attended 24-day care centers in Spain. A third of the kids used hand sanitizer to clean their hands, another third used soap and water, and the last third just followed its usual hand-washing routines.

Each group was required to attend a workshop on hand hygiene, and the first two groups also attended follow-up workshops, plus were given certain hygiene protocols, like making sure to wash hands before and after lunch, or after coughing, sneezing, etc. 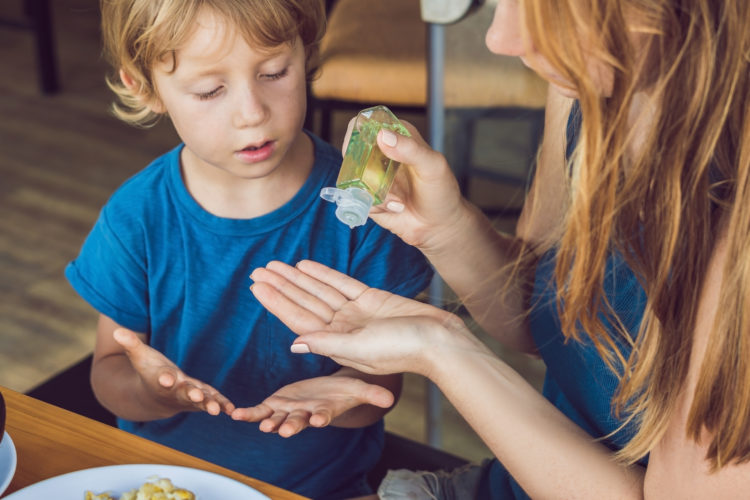 “Hand-washing being a way to prevent infections is not new news anymore, for sure,” says Janet Haas, director of epidemiology at Lenox Hill Hospital in New York. “We know a lot about the fact that it works. We are paying more attention now to the fact that it’s not just washing your hands but how you wash your hands.”

“There is a place for alcohol hand sanitizers, and the public may not be aware of how effective they can be,” Haas continued. “I think people still think of them as ‘if you can’t get to a sink, this is second best,’ but in this study, it showed that it was better than the soap and water hand-washing for this group.”

It’s true—even the CDC notes on their website that “hand sanitizers are not as effective when hands are visibly dirty or greasy.” This study might prove that possibly outdated fact wrong.

This study isn’t to say we should stop teaching kids to wash their hands—of course that’s still important. But it’s good to know that hand sanitizer might not always just be a second-best kind of option.

So do parents start handing their under-three-year-old’s a bottle of hand sanitizer and tell the kids to rub it all over them? Of course not. “They have to be used with supervision, because the caveat here is that you can’t have little kids putting that in their mouth and possibly getting alcohol intoxication,” says Haas.

Do you have your kids wash their hands or use hand sanitizer? Were the results of this study surprising to you?