There’s nothing sweeter than watching a grandparent learn that they will soon have a grandchild in the world! It just seems that when parents get near that retirement age, many want babies in their lives yet again! Case in point is this animated grandma from Indiana. Let’s just say that she didn’t know that she had a granddaughter before meeting her. Confusing, huh? Let us explain . . .

Like most mothers out there, Franklin resident Eva Goeb just loves getting visits from her son and daughter-in-law, Donny and Miranda, even if they may be few and far between. You see, both are in the Air Force, and, like all seasoned military families, they know that separation is, unfortunately, the name of the game.

In the years prior to the filming of this viral video, Donny and Miranda were stationed in Honolulu, Hawaii (not a bad location, if you ask me!), and were, at the time, in the process of becoming adoptive parents. 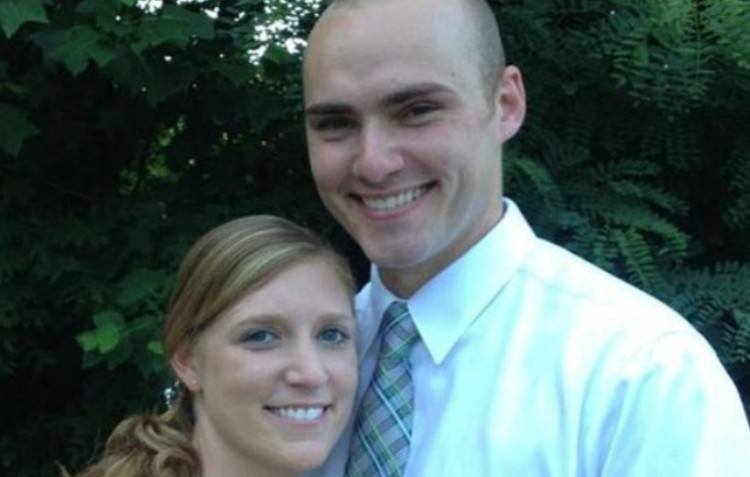 Facebook I Donny Goeb
The couple was able to find a birth mother through a military friend. Nonetheless, both Donny and Miranda remained coy in regards to keeping their family completely in the loop about the adoption. He explains his reason for this on his GoFundMe page:

We decided to keep the placement a secret from our families because adoption placements can fail. We didn’t want to tell them that they had a granddaughter too soon only to painfully recant our announcement.

We don’t blame the guy one bit for being a bit hush-hush about all of this! Talk about an emotionally charged situation.

But, just like all good things in life, the adoption went through and the Donny and Miranda officially became parents to beautiful Melissa “Lily” Faith just following her December 8 birthday.

The three weren’t originally planning on making the trek out to meet Lily’s grandparents over the holidays, but the stealthy parents were positively bursting at the seams to share the good news!

In fact, Miranda tells news station WTHR that they hid their secret for 10 days before showing up in person! The newly-minted mama explains, “Once the baby Lily was officially placed with us, to become our daughter, we decided that it was not the type of news to be shared over the phone.”

And, once the three finally made it to Donny’s mother’s home in the Midwest, someone (luckily!) broke out a camera and started recording the new grandmother’s reaction as she held her granddaughter for the very first time. As Miranda aptly describes, “They [her in-laws] were shocked, enamored, in awe and in love simultaneously.”

You just have to see this woman hold her “secret” granddaughter for the very first time. It’s absolutely incredible! Click on the video below to see the reaction of a lifetime.

What do you think of this unique meeting between grandmother and granddaughter? Were you surprised by Grandma Eva’s colorful reaction? Do you have a special adoption story that you would like to share? Feel free to tell us about your thoughts and experiences in the comments section below!