To Save His Marriage, Gordon Ramsay Goes Through Extreme Weight Loss

Celebrity Chef Gordon Ramsay is known for his harsh, blunt cooking advice on his show Hell’s Kitchen. Sometimes yelling at his competitors until they cry, he’s the guy we love to hate. Because of that, we’d never know he was facing his own internal struggle for a while—one that he was never very vocal about until recently.

Perhaps it’s all the food he’s around all the time, but Ramsay was feeling pretty down on himself after putting on some weight over the years. Okay, it was a lot of weight. And while he noticed it himself, it was in fact his wife Tana, who’s a self-proclaimed fitness guru, who brought it up to him, which didn’t make him feel very good.

“Tana was not impressed with the way I was,” Ramsay said. “I was overweight, 18 stone [over 250 pounds]. I looked like a sack of sh*t. I look at the pictures and think, ‘How did Tana stay around?’ Because Tana has got better-looking and more gorgeous. And there she is, getting in bed with a fat f*ck.”

Excuse his potty mouth (as usual)—but man, Ramsay was really suffering some serious low self esteem, especially for someone who was so successful. But perhaps that right there could’ve been the cause for the weight gain, he says. With a all the stress, travel, and of course, he food, he just wasn’t paying that close attention to it and feels guilty for letting it happen.

“I don’t want my industry to kill me,” Ramsay said. “I know how unhealthy chefs are at the top level. Stress. Suicide. There’s a big downside to cooking loads for a living. It’s lethal: from obesity to heart attacks to cocaine habits.” 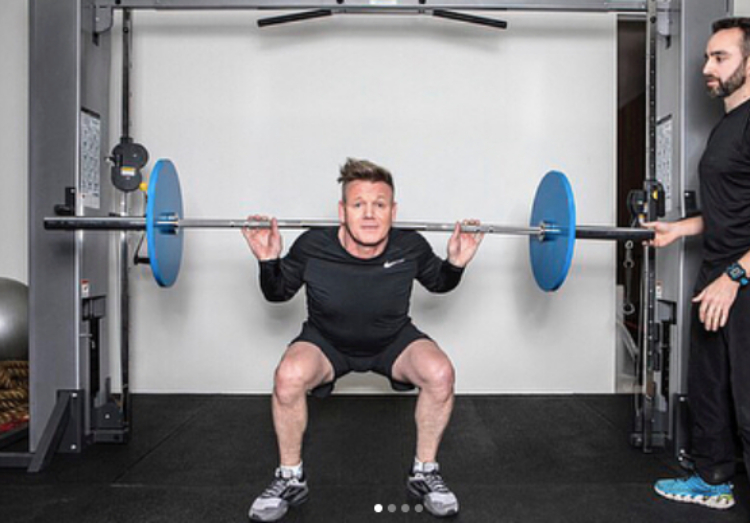 Besides his wife, another motivator is his father, who passed away at the age of 53 (Ramsay is 51). “That’s only a couple of years’ time,” he said. “I’ve got this reminder to get fit, it’s scary. I get the fear on a daily basis. I may have not got on with him, but I still miss him. I miss everything I could have had from him if he was still alive in his 70s.”

Once he finally set it as a goal to lose the weight he gained, he buckled down. He hired a trainer who really pushed him to get active multiple times a week. From hour-long bike rides at home to squats and deadlifts, Ramsay was finally getting his weight under control.

Since he began his weight-loss journey, Ramsay has lost a total of 56 pounds and is feeling better than ever.

But he must be doing more than simply working out. After all, half the battle is the food you put in your body. So what’s this celebrity chef eating to get his weight down so much? Check out the video below for the answer, plus some photos of what he looks like now!


Did you notice Ramsay put on a couple of pounds over the years? What do you think of his extreme weight loss?