Who remembers Gillette’s ad campaign last year? It’s honestly hard to forget. The razor brand created a commercial that focused on “toxic masculinity,”—aka the idea that men who engage in behavior like bullying, catcalling, groping women and more can be excused because “boys will be boys.”

The ad featured several clips of footage portraying real-life actions of sexual harassment, violence and more, even adding a clip of former NFL player, actor, and Proctor and Gamble spokesman Terry Crews testifying in support of a sexual assault bill.

When they created the ad, Gillette all intentions of touching on the #MeToo sexual harassment movement, and hoping that the men who don’t engage in such activity could hold other men who do accountable for their actions.

“This is an important conversation happening, and as a company that encourages men to be their best, we feel compelled to both address it and take action of our own,” Gillette brand director Pankaj Bhalla said at the time they created the ad. “We are taking a realistic look at what’s happening today, and aiming to inspire change by acknowledging that the old saying ‘boys will be boys’ is not an excuse. We want to hold ourselves to a higher standard, and hope all the men we serve will come along on that journey to find our ‘best’ together.”

Over this past year, the ad, which was developed by Gillette’s advertising agency, AOR Grey, and directed by Kim Gehrig, has received some extremely controversial opinions—and most of them were on the bad side. From the ad being sexist to showcasing men in a stereotypical and negative way, customers were not exactly thrilled with the message they felt it was portraying. 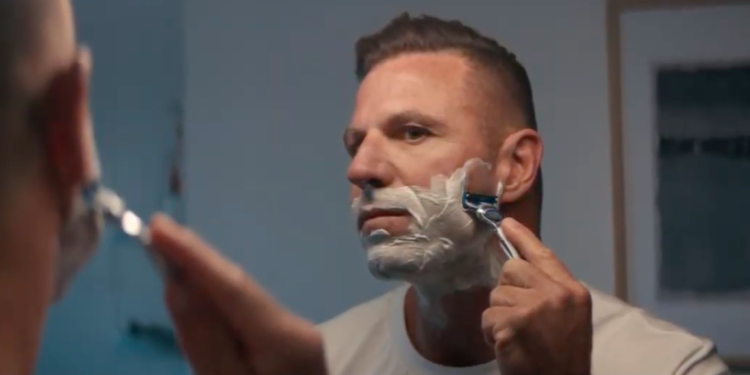 In fact, there was so much backlash on the toxic masculinity ad that Gillette actually lost a ton of money in the making of the campaign. Procter & Gamble “reported a net loss of about $5.24 billion, or $2.12 per share, for the quarter ended June 30, due to an $8 billion non-cash writedown of Gillette,” the news agency explained. Yikes.

After the huge loss, the brand has just released a new ad, with an entirely new focus. Gillette has stated they will be taking the focus off this idea of toxic masculinity, and will be “shifting the spotlight from social issues to local heroes.”

“We will continue to represent men at their best,” says Manu Airan, associate brand director for Gillette Australia and New Zealand. “This is our purpose and has been our purpose consistently for 118 years and that is not changing.”

Their new motto is seen in their new a, which puts the spotlight on firefights. The ad stars Ben Ziekenheiner, an Australian firefighter and personal trainer, who talks about how he has to mentally and physically prepare for his taxing job—and that begins with a Gillette razor.

The ad is pretty powerful, but we’ll let you make the decision yourself. Check it out in the video below!

What do you think of Gilette’s new ad and brand focus? What was your opinion on the toxic masculinity ad? Did you think it was negative and stereotypical, or had good intentions behind it?