There’s a Ghost Among These Women. Do You See It?

Are you a skeptic, or a believer? Do you believe there are things we can’t understand with our human senses, or do you only trust what you can see, hear and touch? Would you consider the possibility of the supernatural, or does that seem utterly ridiculous to you? Basically, what we’re asking is— do you believe in ghosts?

We’ve noticed that people tend to fall into one of two camps when presented with ghostly theories: either they automatically dismiss it and look for any other possible explanation, or they enthusiastically jump on board with even the most dubious claims. As for us? We tend to fall somewhere in the middle. Most of the time, we think there’s probably a logical explanation for the appearance of a ghost— a trick of the light, older photography techniques, Photoshop, pareidolia. The human brain is wired to see what it wants to see – and it really wants to see faces – and the perspective of the person taking the photo plays a huge role in the ultimate outcome, too. So we take most pictures of ghosts with the proverbial grain of salt.

And yet every so often we see one that we just can’t figure out. Usually, it’s an older photo, taken when the art form was so new that people didn’t yet really think of it as art, per se, and were more focused on how magical it was to even be able to capture somebody’s exact likeness. Certainly, nobody had even dreamed of Photoshop yet. So how do we explain the weird things in photographs like this one? 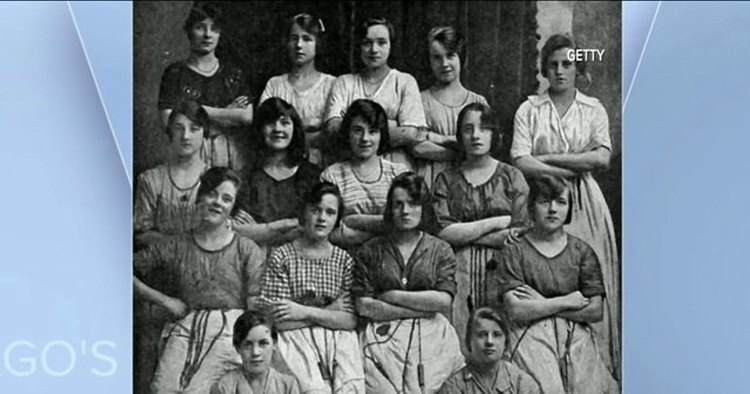 Look closely there and tell us what you see. Obviously, it’s a black-and-white photo of a group of women. It was taken around the year 1900 in Belfast, Ireland (what is now Northern Ireland). The women are workers in a linen mill, and they’re still wearing their work uniforms. As was typical of people at the time, still unused to having their pictures taken, some of the women are smiling, and some seem a little unsure. All and all, it’s a pretty typical period photograph— until you see it. Do you?

If you don’t, try this: count the women in the photograph. Got it? There are 15 women posed here. Now, count the hands. Make note of whose hands are where, and who has her arms crossed. Do you see it now? If not, we’ll let Chicago’s WGN 9 point it out to you. Watch this:

Pretty spooky, right? However you feel about ghosts, and whatever you think about “evidence” of the supernatural, you have to admit that this photograph is at least a little strange. If you don’t think it’s a ghost, who do you think that hand belongs to? What could be a rational explanation? Photoshop has been ruled out, so what other explanations does that leave? Tell us YOUR theories, and if you spotted the photo’s anachronism right away. What do YOU believe?