If there’s one thing parents know, it’s that flying with a child is rarely described as “fun.” The meltdowns over not having enough snacks, the way they kick that poor dope’s seat in front of them, the tantrums over the on-flight WiFi being down…let’s say, if “should we drug our child before this six-hour plane ride?” has ever crossed your mind before, you’re not alone (but rest assured, there are better options).

Enter A-list movie star George Clooney and his wife, international human rights lawyer, Amal, who figured out a way to make being on an airplane with a baby (or two) a bit easier on them—and everyone else.

Upon boarding a recent flight to London with their six-month-old twins, Ella and Alexander, the Clooneys decided to gift every one of their fellow members in first class a pair of noise-cancelling headphones—just in case the twins started to cry.

While most of us would struggle to shell out $50+ on fancy headphones for each plane member in this situation, the well-meaning parents also handed out a note to the passengers apologizing in advance if their babies were to cry. The irony about it all? The twins didn’t even make a sound on the entire flight. 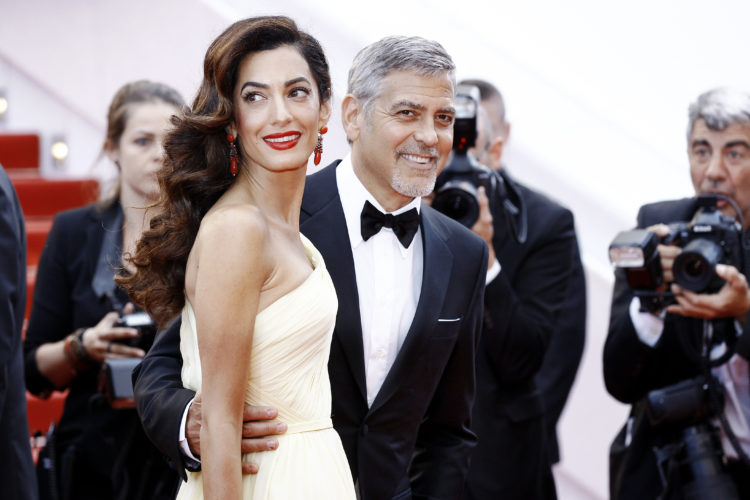 Perhaps the lack of tears could relate to all the flying practice the twins have gotten in just their short few months of life. The two were just one-and-a-half months old when the family of four took a vacation (traveling in luxury aboard a private jet this time) to Clooney’s Lake Como estate in the Lombardy region of Italy, a special place for the two of them. In fact, that’s where George and Amal were introduced in 2013 just a year before they got engaged.

But seriously, how cute can the Clooneys get? George himself (dubbed the Sexiest Man Alive in a ’97 issue of People, might we add) has been filling media (and our hearts) with stories about his good-guy ways for years. Known for being a humanitarian and philanthropist, George is associated with many charities, including United Way, UNICEF, Make-A-Wish Foundation, and many others.

Besides helping charities affecting people he doesn’t know personally, he even knows how to show his closest loved ones some love—and some dough. In 2013, he gifted each one of his closest friends $1 million each. Yes, each of them! Where do we sign up to be his BFF?

George has also always felt strongly about helping those in poverty. In fact in 2016, he and Amal co-founded The Clooney Foundation for Justice with the goal to advance justice in courtrooms, classrooms and communities nationwide. This summer, one of their biggest projects was to allow out-of-school Syrian refugee children to receive an education.

There’s another brand George co-founded (and sold)—and it may have actually been the logo on the headphones the couple handed out on the plane to London. Wondering who else was on board that flight—and who scored a pair? Watch this video to find out.