Tour a Gas Station That Was Converted Into a Home

A dream of nostalgic grease monkeys everywhere came true for one New Orleans artist who took an old gas station and made it his home. Being an artist certainly helped the resident create a space that ties in elements from old cars and the heyday of gas stations while also making a modern look that is flush with cool features. The unexpected openness of the interior would throw off anyone looking from the outside.

One aesthetic feature you may see coming is the look of the old-time garage doors, but that is probably all that you would expect. This ain’t your grandmother’s garage. In this converted residence two miles from the French Quarter, Robert Guthrie who hangs his hat in the old service station has plenty of antique pieces and wall art from the time period where this gas station thrived.

Even with the pertinent accents, the home comes off as cool rather than corny. Mostly because those accents remain as such instead of overwhelming the space. Some of the best examples of these hints of nostalgia are listed and pictured below, but Guthrie has taken things to a new level by combining a slick, stylish and comfortable home that is part man-cave, part museum, and all good.

The tall ceilings with wood trellises give the space a rustic loft look one might expect in a converted barn, which presents a contrast to the metallic cabinets and furniture. Speaking of those, Guthrie has car emblems as the handles on the kitchen cabinets.

CNN Money
Guthrie’s favorite space happens to be the bathroom with black subway tile, an oilcan holder that holds the toilet paper and old car headlamps as the lights above the sink. 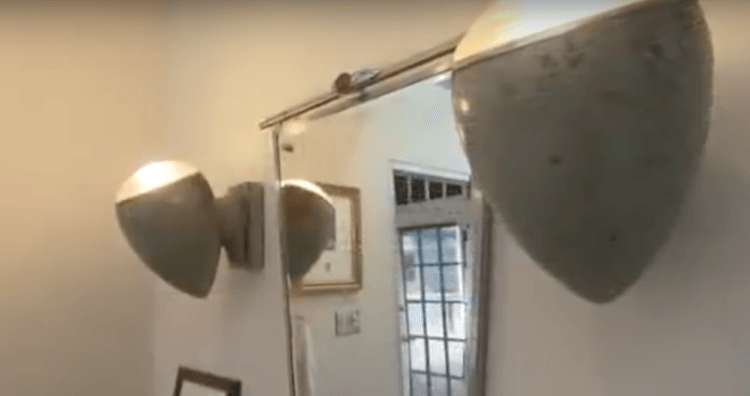 CNN Money
The station’s hydraulic lift now serves the pedestal that supports the first landing of the stairs that lead to Guthrie’s bedroom that has the rear end of a car with working lights above the bed.

On the exterior, the station gives off what Guthrie calls a “Spanish-style” look with green tiles and the original signage. But the roof was converted into a deck to attain some private outdoor space.

CNN Money
Check out the tour of the converted gas station home!
Share on Facebook
Most Popular