Magalia, California resident, 93-year-old Margaret Newsum, was just getting her day started the same way she does every day—making a bowl of oatmeal and turning on the TV. The oatmeal went fine, but it’s when she turned on the TV that chaos began.

“They said there was a fire going into Paradise,” Newsum said, referring to the fires erupting in the Butte County. As untimely as it would have it, Newsum’s caregiver, who actually lives in Paradise, had just left her home for the day.

At 93-years-old, Newsum wasn’t quite sure what to do or what was going to happen. Alone with her seven cats, and unable to reach her caregiver, she fearfully stepped outside to see if there was anyone around who could help her.

And perhaps as untimely as it was when her caregiver had left, a new friendly face showed up at the exact right time: Her garbageman, Dane Ray Cummings.

“I was standing on the front porch when this great, big, green monster drove up, and my dear friend was emptying the garbage,” Newsum recalled. “I call him my private worker because he’s so great—and he said, ‘You’re not staying here. You’ve got to get out of here. Why are you still here?'”

When Newsum explained to him that she didn’t have any family in the area and her caregiver was unreachable, Cummings hardly thought twice about taking matters in to his own hands.

With the help of some of her neighbors, he carefully got Newsum into his garbage truck to get her away from the fires.

“They lifted her, and we scooted her on the seat and put the seat belt on her and made sure she was up there far enough so she wouldn’t fall out either side, and that was it. We were on the road,” said Cummings. 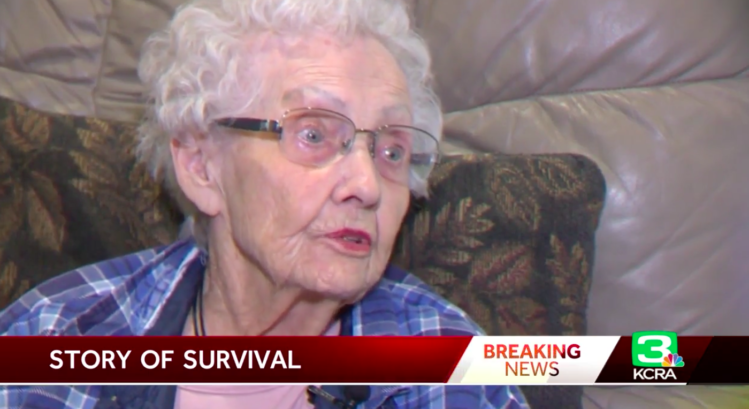 Instead of turning around, as Cummings’ supervisor insisted at this point, Cummings continued on his route with Newsum in tow to make sure that anyone who needed help was taken care of.

Cummings said this daily route holds a special place in his heart because of the many elderly people who live along it, and he wanted to make sure that they were safe.

As Cummings rode with Newsum for five more hours, he learned a lot about her—everything from her three cancer scares to her feelings after witnessing the attack on Pearl Harbor, to her time as a backup singer.

After their lengthy conversation, Cummings even admitted something pretty adorable.

“I wish I’d known her when she was younger. I would’ve married her, you know what I mean? It was the best conversation I’ve had in a truck ever,” he said.

Luckily, the fire never did get to Newsum’s home, so she would’ve been safe had Cummings not picked her up. But he’s still really glad he did. Something tells us his weekly pickup might hold even more of a special place in both their hearts than before!

To hear more from Newsum and Cummings on the “adventure,” check out the video below.

How sweet is this story? Have you ever gotten to know your garbage man, or found friendship in an unexpected place?