Nicole Jones is the single mother of two kids living in one of America’s wealthiest zip codes: Silicon Valley, California. Nicole is a bartender and makes good money serving the wealthy employees of Apple, Google, and other tech companies that have been taking over the area for years. Ironically enough, it’s those same patrons who have caused Nicole’s unusual living situation, although unintentionally, of course.

Currently, Nicole and her two kids are living in a one-car garage for $1,000 a month. It’s a cramped space for the family of three, but it was the best option Nicole could find, after spending $750 on application fees searching for other apartments.

The family had to leave their spacious apartment in the Valley because the cost of rent had skyrocketed. Tech company employees, searching for housing, have sent local rent into the stratosphere, with the average rent for the area hitting just over $3,000 a month.

Even with her solid, steady job, Nicole could no longer afford to pay that rent (as well as for her kids care, groceries, and other expenses) on her salary alone. The family was consequently forced to move, searching for months before settling into the one-car garage. 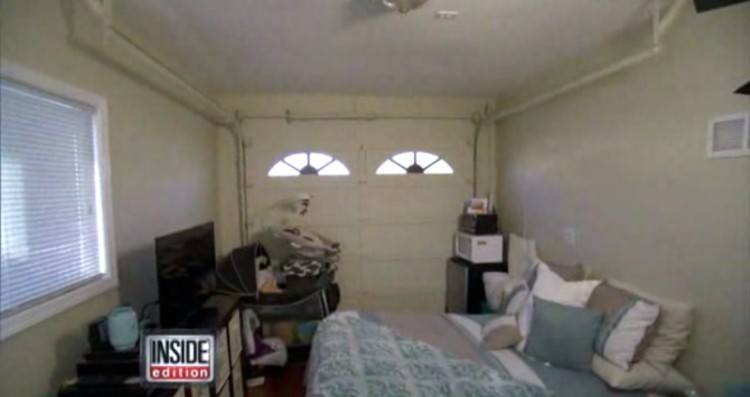 While it does sound like an unconventional space, the garage is surprisingly nice inside! The space fits Nicole’s large Queen bed, an entertainment area with a flat-screen TV, a small bathroom, and a little kitchen area. The family has a mini-fridge for food storage and cooks their meals inside a microwave and toaster oven.

“Honestly, I always thought homeless people were panhandlers or people on the street that were hungry and cold and drug addicts and alcoholics — who didn’t want to do anything for themselves,” Jones told CBS. “I work and make decent money when I’m working. I think part of the reason why I became homeless is because finding work and day care and transportation and everything just combined made it impossible for me to keep a roof over our head.”

Nicole’s kids, as well as Nicole, were enjoying their new, tiny space – until Nicole decided to go public with their situation. When Nicole began to share her story to bring awareness to homelessness and the housing crisis, she received nothing but a string of hate mail. Complete strangers were judging her situation, her decisions, her job, her parenting skills – they were basically judging her entire life because of where her family was living. And none of them truly knew anything about her.

The hate mail did spook Nicole’s landlord somewhat, and she is afraid that her and her children will be evicted as a result.

Friends, family, and strangers have been encouraging Nicole to leave the area for somewhere more affordable, but Nicole’s rebuttal is that moving to a different area would be extremely difficult with her children. Undoubtedly, both of her kids have friends and lives, and their mother cannot stand the thought of tearing them away from that because of this situation.

At the end of the day, despite the unconventional nature of the living arrangement, Nicole is a hardworking single mother who is doing what she needs to for her family. It’s clear that everything she has done is for the betterment of her kids – mainly, so they can have a roof over their head and a place to call home, even if it’s a little out of the norm.

What do you think of this one-car garage home? Share your thoughts on Nicole’s story in the comments section below